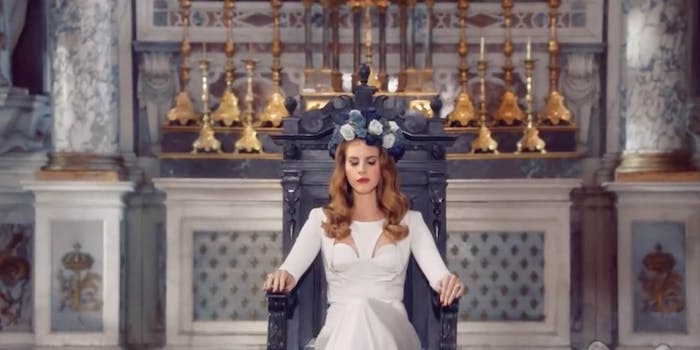 Did Lana Del Rey really crash a stan chat and cuss out all her fans?

After being accused of racism for her Instagram post that only called out women of color, Lana Del Rey was accused of crashing a chatroom and cussing out fans.

According to several Twitter accounts that shared screenshots of the alleged exchange, Del Rey entered the Instagram group chat and told fans that they weren’t really fans and to “Go. Fuck. Yourself.”

One of the stan accounts in the chat, Weadorelana, penned an Instagram post explaining what went down. Weadorelana claimed that Del Rey lashed out after they expressed “concern for her mental health.”

More screenshots of the alleged conversation were later shared.

“Why are you all spamming me?” Del Rey allegedly wrote. “Do you think I have time for imbeciles like you all? You all claim to be fans, but you know what? You are just a bunch of teenagers attacking me for nothing. I did nothing wrong. I just want justice for myself and my art. Is that too much to ask for? Am I being mean? I don’t think so. “

But is it true? Probably not.

Profile names show up in Instagram group chats, not the account handle. So, just about anyone can change their profile names to match the account they are impersonating, which is likely what happened in this case.

While the account alleged to belong to Del Rey has the same profile picture as Del Rey’s real account, the handle is different. And the profile name is slightly different, which is where the confusion probably comes from. Del Rey’s handle is @lanadelrey, while the one that entered the group chat—fans later discovered—is @Lana_del_rey90s (this wasn’t shown in the chat). Del Rey’s profile name is Lana Del Rey, while the one the apparent impersonator used is lanadelrey, matching Del Rey’s handle.

Others believe the screenshots were manufactured. Nevertheless, fans later shared more screenshots “leaked from inside the chat” that showed the Del Rey impersonator claiming they would be deactivating their account because they were afraid of being sued.