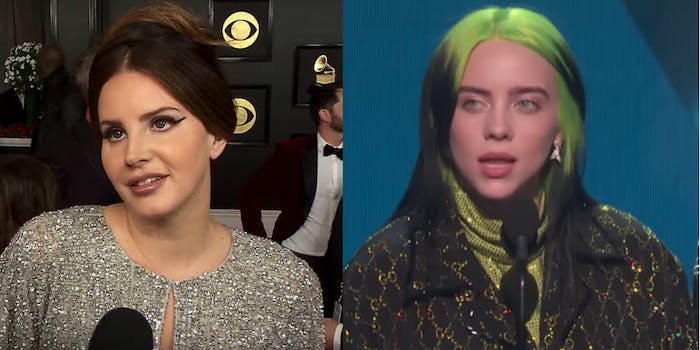 No, Lana Del Rey did not cry because Billie Eilish won album of the year

A photo purports to show Del Rey crying after she didn't win a Grammy for 'Norman Fucking Rockwell!'

In photos that quickly circulated online, the singer appeared to be crying as a result of losing the coveted album of the year award to Billie Eilish. However, Pop Crave has reported a fan Photoshopped the photo of Del Rey.

Turns out the viral #GRAMMYs photo of Lana Del Rey crying over losing ‘Album of the Year’ was photoshopped by a fan. pic.twitter.com/iEBAETDOe3

Eilish ended up winning five Grammys in total, including album of the year. Despite Eilish’s historic win, Del Rey’s fans were quick to show their dissatisfaction online, with some even opting to use the Photoshopped image of the singer.

Following Eilish’s album of the year win, Billboard asked music fans who should’ve won instead, and almost 40 percent voted for Del Rey’s Norman Fucking Rockwell!, with Ariana Grande‘s Thank U, Next coming in second. According to Newsweek, fans started dubbing the award show the “Scammys” in response to their favorite artists being “snubbed.”

Ariana, Lana Del Ray and BTS all meeting after getting snubbed by the fucking grammy #scammys pic.twitter.com/6nW4JFbE2Q

Del Rey has yet to comment on Eilish’s win, but it appears she has no beef with Eilish. In August, Del Rey told the New York Times that she loved Eilish and called her “prodigious.”

“I personally am very discerning,” Del Rey told the Times. “I can tell if a female pop singer, for instance, has a generosity of spirit or a playful fire in her heart. With Billie, she’s prodigious. I needed to hear one line of one melody and I just know.”