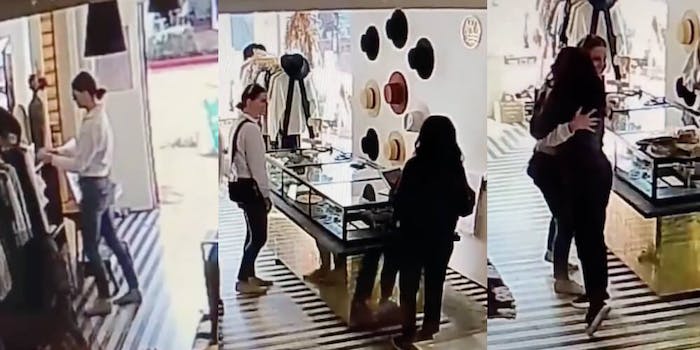 A fan got to meet Lana Del Ray and shared the video footage of the interaction on Twitter.

The video, which was re-shared by the popular Pop Crave Music account, shows what appears to be store footage accompanied by the voiceover of a store employee, narrating what is happening in the video.

“I’m just chilling,” she says in the video. “There goes Lana Del Rey just walking in.”

A lucky fan shares footage and the story of meeting @LanaDelRey at her workplace. pic.twitter.com/4wyffjLqSK

The video continues to show Del Rey browsing throughout some items in the store as the fan remains oblivious to her presence at the time. Then, the two meet at the check-out counter where the employee drops all the clothes she is holding on the counter and asks the pop star for a hug.

It is unclear when the footage was taken, but if anything, one lucky fan has solid evidence that she got to meet Del Rey.