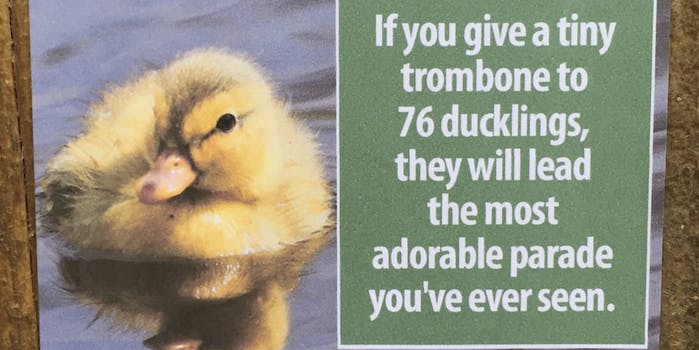 Prankster leaves fake animal facts all over the L.A. Zoo

'America's first president, George Washington, was actually nine koalas stacked on top of each other.'

Wysaski’s hyperrealistic trolling has taken the form of bunk Halloween costumes, erroneous 2015 memories, and bogus Black Friday deals, among many other creations that have delighted the internet while horrifying consumers. His take on the all the weird shit the animal kingdom has to offer is just as spot-on.

It’s hard not to imagine a gaggle of ducks second lining across a pond while stacked-up koalas recreate their own crossing of the Delaware as inaugural U.S. president George Washington.

The evolution of penguins is particularly troubling, though it’s a good thing the flightless bird has proven to be an incredibly woke animal, much like fire ants spicy boys.

As unbelievable as these animal facts are, Obvious Plant’s recent offerings are leading fans to believe he’s stumbled on something way deeper than parody. Take, for example, his surprising facts about Guy Fieri video.

As we all know, Flavortown has had a massive air traffic congestion issue since opening its airspace to allow for more than just drone drops of donkey sauce buckets.

If Wysaski’s project is hiding some deep kernels of truth, then best believe I’ll be leaving my cellphone at home so the meerkats don’t get to it.