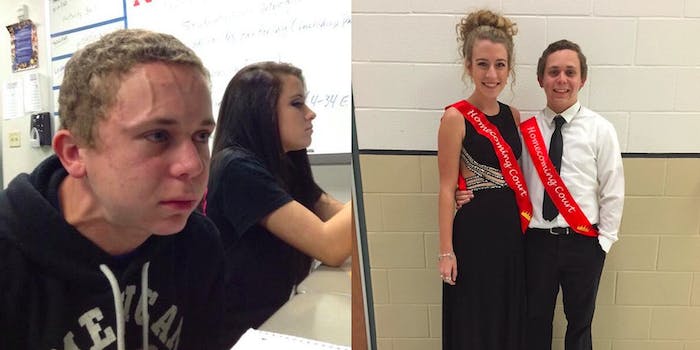 The remixes of the picture are killer.

One day you’re a normal teenager, the next you’re a meme blowing up on the Internet. A picture of 18-year-old Michael McGee has become one of the biggest memes making the rounds lately. He’s the kid with veins meme: red-faced, forehead veins bulging, on the brink of a total meltdown. We tracked down the Reddit thread that helped catapult the image to virality. He even won a place on Know Your Meme as a guy “Trying to Hold a Fart Next to a Cute Girl in Class.”

Where did the Kid with veins meme come from?

And of course, a landslide of remixes ensued.

The picture was taken two years ago when McGee was 16, and the truth is, he wasn’t trying to hold in some gas when he was sitting next to his friend Amber. Really, it was much simpler than that.

We reached out to McGee for answers. This interview has been edited for clarity.

So what’s the story behind the picture?

Michael McGee: Me and my friend Mathew were just hanging out in class and I’ve been good friends with Mathew since forever so he knew I could make that face prior [to] that day. So we thought he could make a funny tweet—as me and Mathew were quite well-known around school for being funny guys on Twitter—so I made the face and he captioned it something and it got little or almost no attention. This is in, like, October of 2013.

When did you become the vein kid meme?

A couple months later in December, around this same time, I woke up and saw my phone blew up. I had like 100+ texts and notifications from all my social media that this picture of me is going around. Like I said earlier, it was originally posted by my friend Mathew. It’s been kinda off and on since then, but it kinda started making a comeback last month.

@Srry_Kid lmao the picture that strarted it all😂

How do you feel about the picture being super popular?

My take on being “Internet famous” is cool and all. But I regret not copyrighting the picture right away because I could have made a lot of money there haha.

What does your family think of the situation?

My family doesn’t really acknowledge it as much as everyone else does. I told my parents when it got real big and they just laughed and shrugged it off. They don’t really understand the power of social media now.