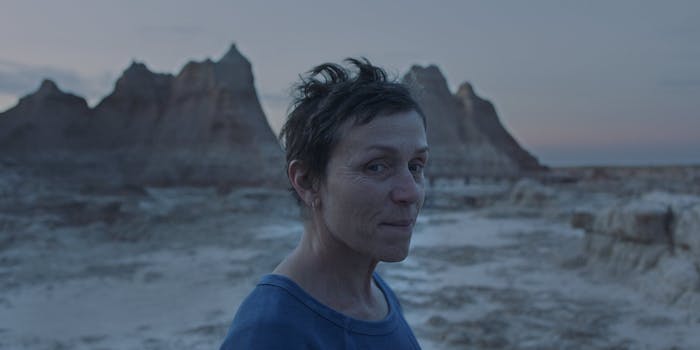 This unexpected moment was actually a heartfelt tribute.

Every Oscars ceremony has a few bizarre and inexplicable moments, with two of this year’s highlights being Daniel Kaluuya talking about his parents having sex and Glenn Close dancing to “Da Butt.” But right before the end, the best picture category offered a moment that left many viewers scratching their heads. During an otherwise serious acceptance speech for Nomadland, actress Frances McDormand howled like a wolf.

A lot of people remarked about McDormand barking or howling, a surreal moment at the end of an unusual Oscars night. But if you listen back to the speech, you’ll notice the howl doesn’t actually come out of nowhere. After talking about the magic of cinema, she concludes her speech with, “We give this one to our wolf.”

The wolf in question is Nomadland‘s production sound mixer Michael Wolf Snyder, who died this year. He also worked with Nomadland director Chloé Zhao on her last film The Rider, and in a post-ceremony interview, Zhao described him as “part of the family.”

Nomadland was a small film with a close-knit cast and crew. In Variety‘s obituary for Michael Wolf Snyder, Zhao said that on both of their films together, “I always looked at Wolf after each take. I didn’t wear headphones on set and so I heavily relied on Wolf to be my ears. He would nod at me with a happy grin, or tears in his eyes, or sometimes he would discreetly signal ‘one more.’ During The Rider, Wolf suggested an idea we later took onto Nomadland—recording room tones longer than we need as a chance to experience silence.”

So while McDormand’s wolf howl was an unexpected moment during the Oscars ceremony, it was actually a heartfelt tribute to a friend and collaborator who helped shape Nomadland‘s success.