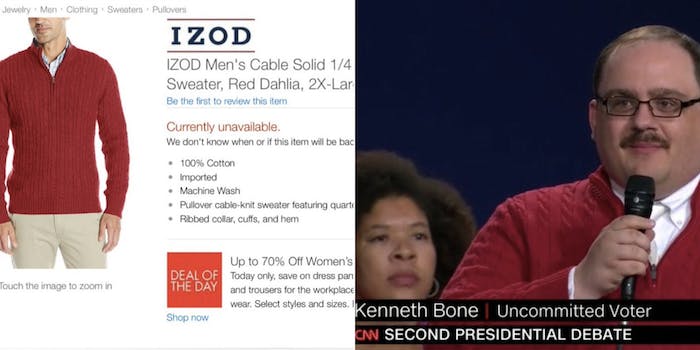 Perhaps because we cannot bear to think about the two people currently running for the job of commander-in-chief for another goddamn second, America has created a huge buzz around Ken Bone, the nice, Midwestern, red-sweatered man who asked a not-very-good question about energy policy at the second presidential debate.

We could talk a lot about the reasons Ken Bone became an instant man-meme, but for now, let’s focus on his style.

Yes, Bone’s sartorial aesthetic was a fixation for many. And when asked about it, Bone had a pretty great story for his fans.

Damn it ken bone I thought I was done but I just can’t quit you, this is adorable pic.twitter.com/gv8pcwMPH5

The content cycle greatly benefitted IZOD, makers of said sweater, who took the opportunity to tout their product.

There’s no debate. The “Town Hall” look is the one to rock. https://t.co/Bt0XCraZUo pic.twitter.com/eFkERbu6sh

Slightly more surprising was the news that the distinctively preppy sweater had quickly sold out—in most sizes, anyway. So get ready to see a lot of Ken Bones this Halloween, I guess.

BREAKING: The Ken Bone sweater has sold out pic.twitter.com/q9FnjeuNPa

Ken Bone Red IZOD sweaters are still available on Amazon if you wear sizes 2XL-5XL. Sold out from S-XL.

Sadly, stealing Bone’s look is likely not as easy as it seems.

Also, are we letting Bone distract us from the real issues?

Cable news: "Can you believe Trump is the Republican nominee? Up next, we spend three minutes asking a portly man about his red sweater."

Nah, definitely not. Fuck the haters.