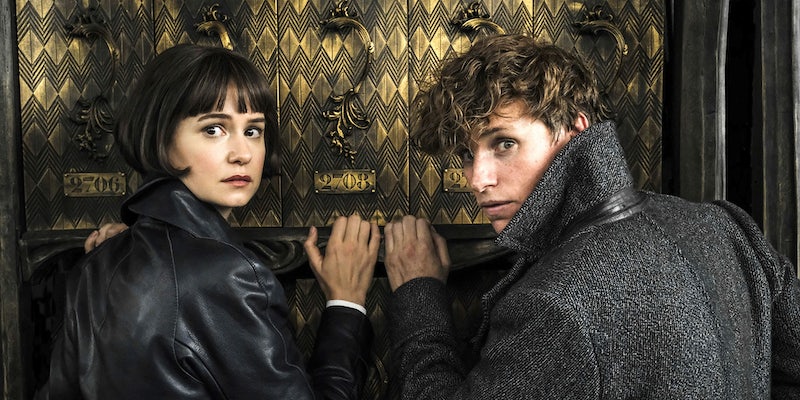 Why did Katherine Waterston’s Tina Goldstein vanish from the ‘Fantastic Beasts’ franchise?

Fans are speculating that Waterston's role was cut from 'The Secrets of Dumbledore' because she supports trans rights.

When the latest trailer arrived for Fantastic Beasts: The Secrets of Dumbledore, many fans were puzzled by a notable absence. The character Tina Goldstein (Katherine Waterston) was nowhere to be seen, after playing a central role in the first two movies. Now, some are wondering if her role was reduced because Waterston publicly opposed J.K. Rowling‘s views on trans rights.

It’s very unusual for a franchise of this size to remove a main character with no explanation. Tina was the secondary lead of the first two Fantastic Beasts films—an American witch who joins the protagonist Newt Scamander (Eddie Redmayne) on his adventures, and will one day become his wife.

While Waterston is still on the cast list for The Secrets of Dumbledore, her role appears drastically reduced. She isn’t even on the posters—and Warner Bros. released a lot of posters for little-known characters in this movie. Judging by the plot summary, The Secrets of Dumbledore prioritizes Newt, Dumbledore (Jude Law), and Grindelwald (Mads Mikkelsen), with Jessica Williams replacing Waterston in scenes where you’d expect Tina to appear in the trailer. Williams plays Professor Eulalie Hicks, who had a brief cameo in the previous film.

So, what happened to Tina Goldstein? There’s no obvious reason for her to vanish from the story. Possibly her role is too spoilery to include in the trailers, but if so, wouldn’t Warner Bros. advertise this as an enticing mystery? Why not give her a generic solo poster, like all these rando side characters?

Meanwhile, Waterston hasn’t commented on her future with the franchise. Unlike Johnny Depp (who previously played Grindelwald), she hasn’t been embroiled in any scandals that might lead to her getting fired. She also has another big movie coming out this year, Damien Chazelle’s Babylon. The one thing we do know is that she publicly disagreed with J.K. Rowling’s stance on trans rights, and a lot of fans latched onto this as a potential explanation.

J.K. Rowling’s anti-trans views became a major controversy in June 2020, when she published an essay including some recognizable transphobic dog whistles. Prior to this, she’d already posted various offensive and troubling tweets that were criticized online, but this essay forced Hollywood to take notice. Harry Potter stars, including Daniel Radcliffe, Emma Watson, and (most notably) Eddie Redmayne released statements in support of trans rights. At this point, The Secrets of Dumbledore was already due to start filming but had been delayed by COVID-19.

Then in September 2020, Redmayne said he was disgusted by the “vitriol” aimed at Rowling online, adding that he wrote her a private note of support. So while he personally disagrees with Rowling’s politics, he maintains a working relationship with her. The question is, can the same be said of Katherine Waterston?

Posting on Instagram Stories in June 2020, Katherine Waterston shared a Guardian article with the headline, “Trans women pose no threat to cis women, but we pose a threat to them if we make them outcasts.” She highlighted the quote, “Sorry, you can’t be a feminist if you’re not for everyone’s human rights, notably other women’s human rights.” A year later in July 2021, Waterston explained, “Because I was associated with Fantastic Beasts, it felt important to communicate my position.” This arguably makes her the most outspoken Fantastic Beasts cast member, since Redmayne has attempted to downplay any suggestion of conflict with Rowling.

Over the past few months, more and more fans have begun to wonder if Waterston was penalized for disagreeing with Rowling. However, this doesn’t line up with the Secrets of Dumbledore production schedule.

Filming was meant to begin in March 2020, and locations were already announced in Nov. 2019, with Jessica Williams’ character confirmed to have a larger role. This suggests that Tina Goldstein already had a smaller role in the script, long before Rowling became a truly controversial figure.

Rowling was accused of holding transphobic views as early as 2018, but not to the extent that cisgender celebrities felt any pressure to comment. Before late 2019, Rowling’s views on gender identity were primarily discussed by politically-active Harry Potter fans, and people with a personal stake in the battle for trans rights. Waterston didn’t make any public statements before June 2020, when other Harry Potter stars were chiming in.

In other words, Waterston’s disappearance from Fantastic Beasts is probably unrelated. Maybe Tina Goldstein just isn’t relevant to the story Rowling wanted to tell in The Secrets of Dumbledore. Maybe there was a different conflict behind the scenes. Or maybe Waterston—who primarily stars in indie dramas—just doesn’t want to make any more Fantastic Beasts movies. It’s rare for actors to step down from a blockbuster franchise, but it’s still entirely possible that Waterston’s reduced role was her own choice.

The Daily Dot has reached out to Warner Bros. and Katherine Waterston’s representatives for comment.