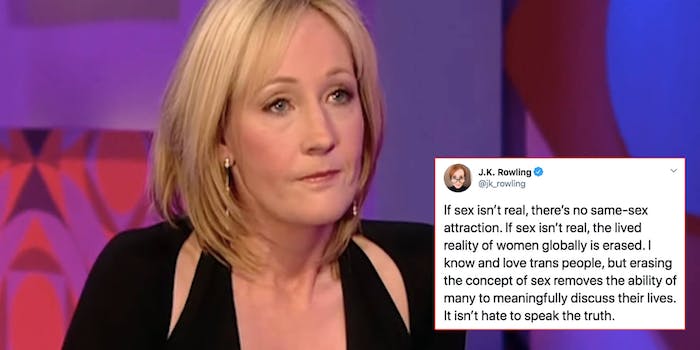 Some are commenting 'F*ck J.K. Rowling' to go along with their donations, while others are donating under the names 'Harry Potter' and 'Hermione Granger.'

J.K. Rowling has spent her post-Harry Potter years maligning her own legacy by just refusing to keep her mouth shut. When she’s not trying to win brownie points with the gay community for half-hearted representation or perpetuating racism with her follow-up works, she’s busy outing herself as a complete TERF (trans-exclusionary radical feminist).

Rowling had previously spoken up in defense of transphobic researcher Maya Forstater, insisting that “sex is real.”

On Saturday, she decided to unleash a series of tweets making absolutely sure everyone knows she doesn’t consider trans women to be women.

“‘People who menstruate,’” Rowling mused. “I’m sure there used to be a word for those people. Someone help me out. Wumben? Wimpund? Woomud?”

When people were quick to point out that not all women menstruate and not all people who menstruate are women, Rowling went on a mini-rant in defense of biological sex.

“If sex isn’t real, there’s no same-sex attraction,” she wrote. “If sex isn’t real, the lived reality of women globally is erased. I know and love trans people, but erasing the concept of sex removes the ability of many to meaningfully discuss their lives. It isn’t hate to speak the truth.”

Rowling’s opinions are a confusing and willful conflation of biological sex and gender identity, which several people—including medical professionals—attempted to correct.

Rowling’s comments also seemed to imply that transgender women being seen as women somehow invalidates the struggles of cisgender women and negates the existence of lesbians, which people were not here for.

But folks ultimately shifted the energy they were using to express their disappointment with a once-beloved author’s lack of inclusivity and put it toward raising money for homeless Black trans women in Atlanta.

The GoFundMe was already well underway when Rowling purposely stuck her foot in her mouth, but Harry Potter fans are giving it a pointed boost. Not only has it been shared thousands of times since the author’s tweets, but it’s raised over $1.7 million and counting.

And there is absolutely no question as to why that money is rolling in.

Some are commenting “Fuck J.K. Rowling” to go along with their donations, while others are changing their screen names to “Harry Potter” and “Hermione Granger.”

“I am a gay trans wizard and I support y’all,” one person wrote, along with their $10 donation.

Rowling may have chosen cruelty over kindness, but she helped shape an entire army of young people primed to stand against injustice first. It’s only a shame she’s forcing them to stand against her in the process.