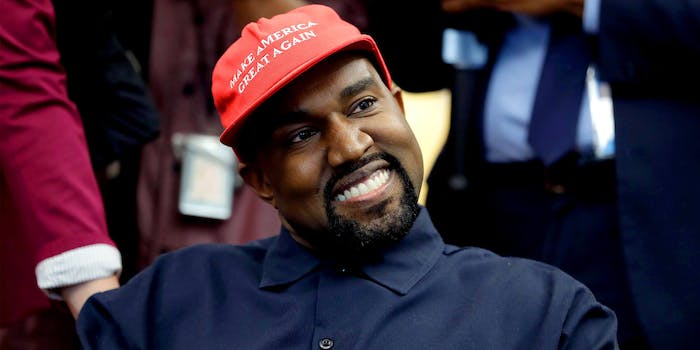 Kanye West doubles down on support of Donald Trump

President Donald Trump has recently drawn the ire of many celebrities for his response to the coronavirus pandemic afflicting the United States. Kanye West is not one of them.

The rapper doubled down on his support for Trump in a new interview with the Wall Street Journal. West balked at the notion that people could make assumptions about his political leanings simply because he is a Black man or a rapper. “I’m a Black guy with a red [MAGA] hat, can you imagine?” he said. “It reminded me of how I felt as a Black guy before I was famous when I would walk in a restaurant and people would look at you like you were going to steal something. ‘This is your place, Ye, don’t talk about apparel. This is your place, Ye, you’re Black, so you’re a Democrat.'”

West also lamented that, despite his myriad successes as a musician and fashion designer, he still could not escape persecution for his oft-controversial ideas. “Everything is about putting people in their place,” he said. “Classism, protectionism—not just racism.”

During a stop on his Saint Pablo Tour in 2016, West announced that he had not voted, but if he had, he would have voted for Trump. The rapper began sporting MAGA hats and tweeting his support for the president after that. In 2018, West tweeted that Trump is his “brother” and said they “are both dragon energy.”

West’s support of Trump has occasionally yielded semi-positive results. When fellow rapper A$AP Rocky was detained in Sweden on assault charges in July, West phoned Jared Kushner at the White House and received a call from Trump less than an hour later. “Just spoke to @KanyeWest about his friend A$AP Rocky’s incarceration. I will be calling the very talented Prime Minister of Sweden to see what we can do about helping A$AP Rocky,” Trump promptly tweeted. (The president’s intervention was unsuccessful, and Rocky left the White House on read after he was released from Swedish jail on Aug. 2.)

West was thrust back into the spotlight this week when transcripts of his phone call with Taylor Swift regarding his song “Famous”—in which he sings of Swift, “I made that bitch famous”—leaked. Both Swift and West’s wife, Kim Kardashian, weighed in on the transcripts on social media, with Kardashian getting dragged for her tone-deaf tweetstorm.

Elsewhere in the WSJ profile, West casually mentioned plans to record a new album in Mexico this spring and said he had asked his fashion studio to look into the possibility of making masks and gowns in response to the growing number of coronavirus cases in the United States.