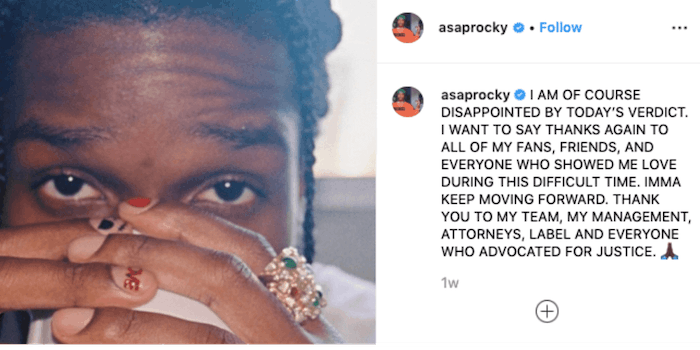 President Donald Trump is waiting on a “thank you” from rapper A$AP Rocky for lending a hand to get him out of a Swedish jail–but it’s not coming.

Since his release from jail on Aug. 2, A$AP Rocky has refused to thank the president, and the rapper’s team has reportedly stopped responding to texts from the White House. Trump, who is revving up his 2020 reelection campaign, was hoping that advocating for A$AP Rocky would help his image among the Black community, according to Yahoo News.

In June, A$AP Rocky was put into jail after a street fight in Stockholm, Sweden. Because of his supposed “flight risk,” A$AP Rocky was kept in jail for about a month as he waited for his case verdict. The rapper has said he was acting in self-defense because a man was following him and later hit his security guards in the face with headphones. He posted about the incident on Instagram.

“WE DONT KNOW THESE GUYS AND WE DIDNT WANT TROUBLE , THEY FOLLOWED US FOR 4 BLOCKS , AND THEY WERE SLAPPING GIRLS BUTTS WHO PASSED , GIVE ME A BREAK,” A$AP Rocky wrote on Instagram, along with a video of the incident.

During this time, several high-profile people came to his defense. Kim Kardashian, who often champions for the release of people she feels have been unjustly jailed, spoke with Trump about the rapper. In addition, Darrell Scott and Kareem Lanier, who focus on issues affecting the Black community for the Trump administration, were advocating for his release behind the scenes. They told Yahoo News that they’re disappointed A$AP Rocky hasn’t thanked the White House.

“All he had to do was do a two-minute call to say thank you,” Scott told Vice News. “Rocky hasn’t even called us and said, ‘Hey, man, thank you, guys. I appreciate it,’ in private. Just in private.”

But Trump wanted a public apology for his tweets and unsuccessful efforts to sway the prime minister of Sweden. The day of A$AP Rocky’s release, Trump wrote a now-notorious tweet in support of the rapper.

“It was a Rocky Week, get home ASAP A$AP!” Trump tweeted.

A$AP Rocky released from prison and on his way home to the United States from Sweden. It was a Rocky Week, get home ASAP A$AP!