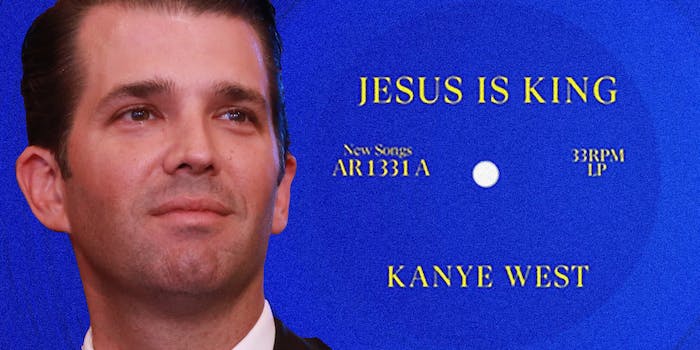 Don Jr. loves Kanye's new album, and the internet hates to see it.

Donald Trump Jr. loves Kanye West’s new album. What could be cooler than that!

The president’s failson took to Twitter to lavish praise on West’s new album, Jesus is King, praising the rapper for “cracking the culture code” and calling the album “the epitome of fearless creativity and ‘dangerous, unapproved’ ideas.”

“Leftists always try to silence those who are speaking truth. They’re waging a war on our family and culture,” Trump Jr. continued. “Kanye is a pioneer.”

Kanye West is cracking the culture code.@kanyewest’s new album #JesusIsKing is the epitome of fearless creativity and “dangerous, unapproved” ideas.

Leftists always try to silence those who are speaking truth. They’re waging a war on our family and culture.

Kanye is a pioneer pic.twitter.com/EmPgLqgGZJ

The “dangerous, unapproved” idea he is talking about is likely Christianity, an idea that has enjoyed widespread and often state-sanctioned approval all over the world for much of the last 2,000 years.

It is also unclear who exactly he is quoting by placing “dangerous, unapproved” in quotation marks. Since the first family is notorious for creative punctuation, we shouldn’t spend too much time racking our brains over it.

Don Jr. contradicts himself later in the same tweet, when he writes, “Leftists always try to silence those who are speaking truth. They’re waging a war on our family and culture.” How can the “culture” of the president’s family be “unapproved”? Truly, a mystery for the ages.

Others, such as Twitter user @Dani_Stanie49, chalked Don Jr.’s praise up as “another reason I’m not listening to this shit,” meaning Jesus Is King.

…And here lies another reason I'm not listening to this shit https://t.co/q9r5VCU92i

Freelance writer and editor Zach Schonfeld had arguably the most accurate and lacerating take. “Congrats on becoming a music critic, dude,” he replied to Don Jr. “Your $50 check will arrive in 4 months.”

Congrats on becoming a music critic, dude. Your $50 check will arrive in 4 months.

For better or worse (well, worse), West has joined Kid Rock and Charlie Daniels on the list of Trump-approved musicians. There’s no telling what’s next for the mercurial West, but this will likely go down as a low point in the rapper’s career arc.

Thus far, Jesus Is King has perhaps been West’s most critically divisive album yet. Pitchfork gave the album a 7.2 out of 10, which, while not a glowing recommendation, is surprisingly high for a maligned pseudo-gospel album. Consequence of Sound, on the other hand, awarded the album an “F.”