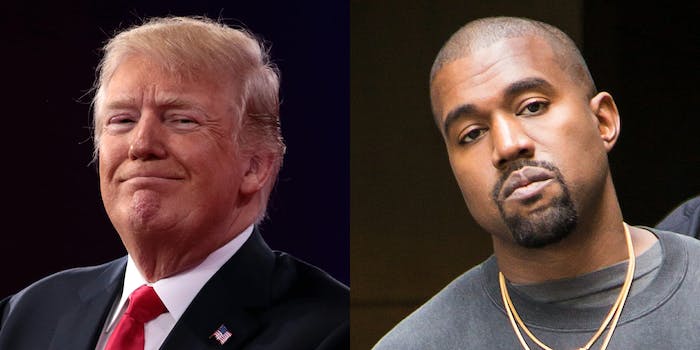 The president supports his most infamous fan.

Over the past several days, Kanye West has been on an extremely lengthy tweet spree, discussing freedom of speech and voicing his support for President Donald Trump, prominent Black conservative thought leader Candace Owens, and vocal right-winger and Dilbert artist Scott Adams.

The thought police want to suppress freedom of thought

Conservatives gravitated toward West’s tweets, declaring him their newfound hero, as his sentiments aligned somewhat with what many of them had vocalized over the past couple of years.

You don't have to agree with trump but the mob can't make me not love him. We are both dragon energy. He is my brother. I love everyone. I don't agree with everything anyone does. That's what makes us individuals. And we have the right to independent thought.

To which, Trump said “thank you.”

West had earlier walked back a bit of his support after his wife, Kim Kardashian spoke with him.

my wife just called me and she wanted me to make this clear to everyone. I don't agree with everything Trump does. I don't agree 100% with anyone but myself.

West met with Trump in Trump Tower when he was president-elect. Naturally, everyone had a great joke about that. Now that seems like more of a reality than a bleak humor.

Or it will be the pairing that saves us all.

💀 RT @FattMernandez: Trump is meeting with Kanye because Kanye is designing the uniforms for the camps. pic.twitter.com/luSzb7Uoi4

Chris Lambert, who hosts West-centric podcast Watching the Throne, thinks it’s performance art, but with a healthy dose of naivety. As he told the Dot in a statement:

Since his initial support of Trump, through his liking Candace Owens, to today, Kanye has focused on communication and free thinking. It’s never been about the micro of the politics and what’s said. But the macro of how it’s said and breaking through what people are told to say/think. Kanye was a producer and wasn’t supposed to be a rapper. He was a rapper who couldn’t be a pop star. Then he was a pop star who couldn’t be an artist. Then he was an artist but could be in fashion. It makes sense why Trump crossing over into politics would appeal.

I think people jump the gun when saying Kanye supports the politics of Trump, or Candace Owens, as Kanye has clearly stated other political views. He’s a futurist and progressive at his core.

And a few of the seemingly interesting details. Before all of this political content, he was speaking in a very zen, philosophical way. Then said “Controversy is my gym.” Then he’s gone all in on the politics. Ebro said that Kanye understood he’s getting Heat right now but will explain more on the album. So how much of this is Kanye being a performance artist and magnetizing attention?

And this is the same guy who tried to retake the Confederate flag as part of the Yeezus iconography. He probably has some views on the MAGA hat we haven’t heard yet.

With all that said, I do think it’s irresponsible/naive to ignore the politics of Trump, his administration, and his political allies. It seems Kanye has a point he’s building to, but it’s going to be a bumpy ride getting there. And, once we’re there, there’s a whole new debate that will follow.

Kim Kardashian defended her husband on Twitter, and Trump Jr. quickly stepped in to spin the situation in favor of team Trump.

For now, West seems elated at the attention.