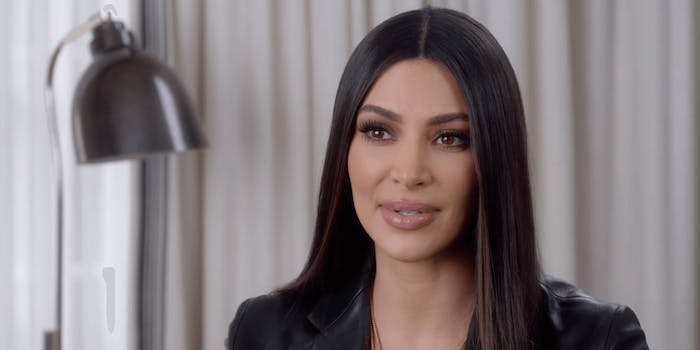 She responded at the worst time—and got dragged all over social.

In case you don’t remember: In 2016, West released a song called “Famous” that includes the lyrics: “I feel like me and Taylor might still have sex / Why? I made that bitch famous.” Those lyrics understandably didn’t sit well with Swift, who alleged that West blindsided her with the song’s release. West’s wife, Kim Kardashian, seemingly undid Swift’s claims by sharing via Snapchat a video of both artists discussing the song over the phone, in which Swift cautiously OK’d the first half of the aforementioned lyric.

The video put Swift in celebrity purgatory for years, even though she claimed her objection was always with being called “that bitch.” Over the weekend, Variety released the transcript of the full, 25-minute phone call, which reveals that West made no mention of the “bitch” lyric. Since then, the feud has snowballed yet again, with members of both parties serving volleys on social media.

Swift served first, getting in a few digs at Kardashian but largely opting for the high road with a post on her Instagram story. “Instead of answering those who are asking how I feel about the video footage that leaked, proving that I was telling the truth the whole time about *that call* (you now, the one that was illegally recorded, that somebody edited and manipulated in order to frame me and put me, my family, and fans through hell for 4 years)… SWIPE UP to see what really matters,” Swift wrote, linking to a handful of charities to which she had been donating, including the World Health Organization and Feeding America.

Last night, Kardashian responded to Swift in a scorched-earth Twitter thread. “[email protected] has chosen to reignite an old exchange – that at this point in time feels very self-serving given the suffering millions of real victims are facing right now,” she wrote to kick off the nine-tweet thread. Kardashian accused Swift of lying through her publicist about the existence of the conversation, denied editing her Snapchat footage, and defended West’s decision to record the phone call for his personal archive. “This will be the last time I speak on this because honestly, nobody cares,” she wrote in her final tweet.

That last part was not true. Swift’s publicist, Tree Paine, cared enough to share her own statement on Twitter. “Kanye did not call for approval, but to ask Taylor to release his single ‘Famous’ on her Twitter account,” she wrote. “She declined and cautioned him about releasing a song with such a strong misogynistic message. Taylor was never made aware of the actual lyric, ‘I made that bitch famous.'” Paine ended her tweet with a savage footnote: “P.S. who did you guys piss off to leak that video?”

Khloe Kardashian chimed in to defend her sister as well, writing, “Kim is my fucking lawyer for life!!!!!! My sister AND my lawyer.”

Other spectators in the decade-old feud took care to point out that the latest development is taking place in the midst of a global pandemic that has already killed thousands of people. Journalist Brian A. Hernandez summed it up aptly: “Kim, there’s people that are dying.”

Kardashian seems to be experiencing a swift (no pun intended) reversal of fortune, as #KimKardashianIsOverParty is currently the fifth-highest-trending hashtag in the United States.

The Kardashians are no strangers to this type of heat; they are, after all, the stars of their own titular reality show. Exhausting though it may be, this latest scuffle will surely serve to pad their wallets in the future, somehow. As the coronavirus continues to spread and the biggest celebrity feud of the last decade continues to rage, it’s shaping up to be a cruel summer, indeed.