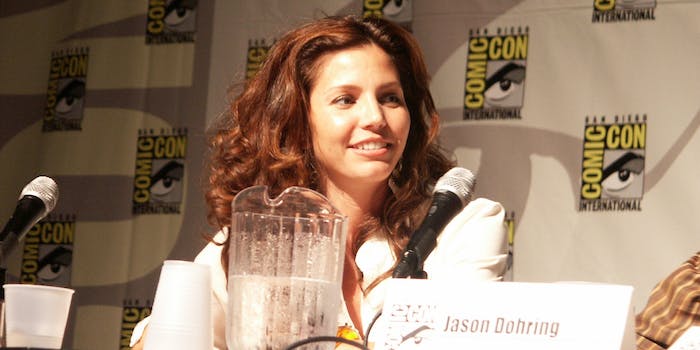 Sarah Michelle Gellar, Anthony Head and others have commented on Carpenter's abuse allegations.

Buffy and Angel star Charisma Carpenter went public with some alarming allegations about writer/director Joss Whedon on Wednesday, accusing him of creating a “toxic work environment” and punishing her for getting pregnant while filming Angel. Her statement adds to an ongoing series of accusations that characterize Whedon as an abusive boss. Other Buffy stars are now weighing in, including Sarah Michelle Gellar (Buffy), Anthony Head (Giles), Michelle Trachtenberg (Dawn), Amber Benson (Tara), and several other members of the cast and crew.

Sarah Michelle Gellar posted a short statement on Instagram, saying, “I don’t want to be forever associated with the name Joss Whedon,” while pledging support for “all survivors of abuse.” This was reposted by Emma Caulfield (who played the demon Anya for several seasons) and Michelle Trachtenberg. Commenting on Gellar’s post, Trachtenberg wrote, “We know what he did. Behind. The. Scenes.” She also described Whedon’s behavior as “not appropriate,” as a young actress who started working with him at the age of 15:

“Thank you @sarahmgellar for saying this. I am brave enough now as a 35 year old woman….To repost this. Because. This must. Be known. As a teenager. With his not appropriate behavior….very. Not. Appropriate. So now. People know. What Joss. Did.”

In a British TV interview on Thursday morning, Anthony Head said he was “gutted” to read these allegations and added he’d been “up most of the night running through [his] memories” of working on the show, wondering what he’d missed. “This is not a man saying, ‘I didn’t see this so it didn’t happen,'” he said. “I’m gutted because one of my memories, my fondest memory was that [Buffy] was so empowering.” As the oldest member of the main cast, he saw himself as a “father figure” to the younger actors and is now wondering why they didn’t come to him if they were struggling.

Head’s comments were supportive and sympathetic, but he evidently had a more positive experience working on Buffy, and is now having to reevaluate those memories. This is a familiar tale in this kind of scenario, where an abusive authority figure chooses vulnerable targets—for instance young women, or in the case of Ray Fisher in Justice League, a little-known Black actor who had far less power than his A-list co-stars. Meanwhile, other coworkers can be totally unaware that abuse is taking place nearby—often due to the very different experiences between, say, a teenage girl versus an experienced, middle-aged man like Anthony Head.

Amber Benson, who played Willow’s love-interest Tara, retweeted Carpenter’s statement saying, “there was a lot of damage done during that time.” Clare Kramer (who played the season 5 villain Glory) tweeted, “I believe and stand with @allcharisma, @ray8fisher, @amber_benson and others who have the strength to come forward.” Actor James C Leary (who played the recurring demon character Clem) also pledged his support for Carpenter.

Sophia Crawford, Sarah Michelle Gellar’s longtime Buffy stunt double, posted an Instagram photo supporting Whedon’s accusers. Last year, Crawford and her husband Jeff Pruit (Buffy’s stunt coordinator) gave an interview describing Whedon as an “egomaniac” who tormented them while they worked on the show. They alleged that Whedon had Pruitt’s home computer tapped and that Whedon demanded that Crawford break up with Pruitt in exchange for more work on the show. The couple quit Buffy, and while Pruitt claims that Whedon threatened their careers, they were able to find other jobs due to their own contacts in the industry.

WATCH NEXT: The Secret Language of Sitcom Fashion

Enough actors have now come forward that fans are wondering what Carpenter’s remaining co-stars think about Whedon’s behavior. In particular, her Angel co-star David Boreanaz hasn’t made any kind of statement, and his Twitter account is currently locked. Boreanaz was sued for sexual harassment in 2010 by an extra on the TV show Bones, who was represented (alongside another woman who made similar accusations) by women’s rights attorney Gloria Allred. Boreanaz denied the accusations.

Whedon has not responded publicly to Carpenter’s allegations.