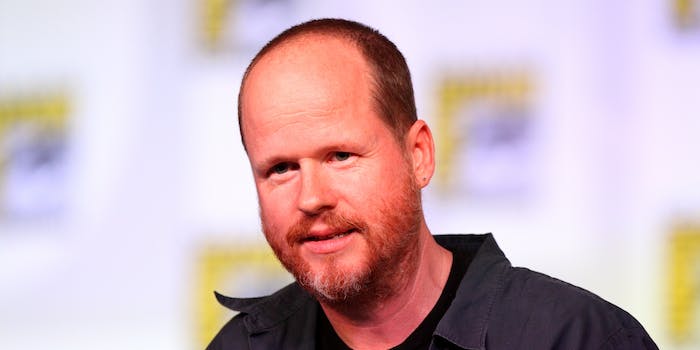 Whedon's departure comes amid a Warner Bros. investigation into his alleged misconduct while making 'Justice League.'

In a surprise move from HBO, filmmaker Joss Whedon is no longer attached to his upcoming TV show The Nevers, his first big project since completing Justice League in 2017.

The Nevers is a Victorian fantasy drama with an extremely Whedonesque premise about a group of superpowered women called the Touched. Announced in 2018, it already has a full cast in place and is scheduled to premiere in 2021. The scripts are most likely completed and ready to film. Whedon was meant to act as showrunner and director, but on Wednesday he and HBO announced that he was no longer involved in the show.

In a statement to The Hollywood Reporter, an HBO representative simply said that the streaming service had “parted ways” with Whedon while remaining “excited about the future of The Nevers.” Whedon offered a longer statement, attributing his departure to exhaustion due to the mental and physical challenges of running a big-budget show during a pandemic. He said he was proud of his work on The Nevers, “a labor of love,” and explained that he was leaving the project in order to “martial my energy towards my own life, which is also at the brink of exciting change.”

This enigmatic phrasing raises a lot of questions, particularly in light of Whedon’s increasingly controversial reputation. In 2017, his ex-wife publicly accused him of abusive behavior throughout their marriage. The allegation stunned many of his fans, leading them to reevaluate his status as a feminist ally. This overlapped with other anecdotes about troublesome behavior in his professional life, including public allegations of on-set misconduct from Justice League actor Ray Fisher.

For the past six months, Fisher has repeatedly spoken out about his experiences filming Justice League, accusing Whedon and several Warner Bros. producers of abusive behavior and racist creative choices. This led to an internal investigation at Warner Bros., running parallel to the studio’s public choice to fund and release the Snyder Cut, downplaying Whedon’s cinematic cut of Justice League and spending millions of dollars to finish Snyder’s vision instead.

Since Warner Bros. is HBO’s parent company, this raises the question of whether Whedon left The Nevers purely for his own reasons or his departure is connected to the investigation. Fisher has already tweeted his own opinion on the matter, saying, “WarnerMedia’s JL investigation has been in full swing for over 3 weeks now. This is undoubtedly a result of it.”