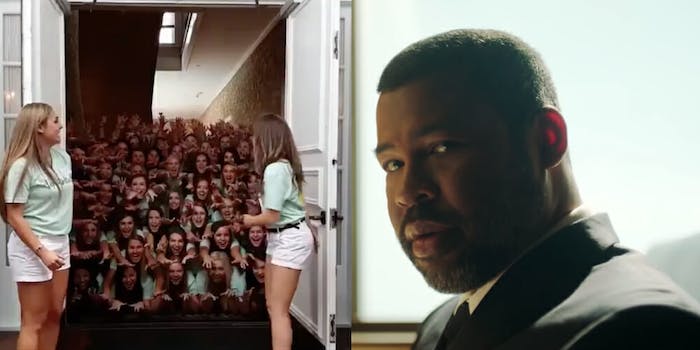 Jordan Peele’s next bout of inspiration might just come from that creepy, viral sorority video

'I’ve been getting a lot of great inspiration recently.'

A creepy, viral sorority video from 2016 is making its rounds on Twitter again, and a sinister-looking photo of Jared Kushner and Ivanka Trump has turned into a meme this week. Real life is beginning to look a lot like a horror movie.

It seems like Jordan Peele has been paying attention because the Get Out and Us director just tweeted that he is ~inspired~ by the memes.

“Between this and that terrifying sorority video, I’ve been getting a lot of great inspiration recently,” Peele tweeted in response to a news outlet posting the creepy photo of Trump and Kushner.

Between this and that terrifying sorority video, I’ve been getting a lot of great inspiration recently. https://t.co/QMEmYlPQDr

The sorority video originally went viral in 2016 when the internet decided to collectively dunk on recruitment videos. While others were pretty cringeworthy, the one made by the University of Texas at Austin’s chapter of Alpha Delta Pi proved to be downright scary.

The video is so haunting that it has resurged in popularity because “there’s still no video more terrifying than this,” a Twitter user proclaimed.

The post garnered more than 200,000 likes in two days and brought in a fresh slate of memes.

After describing the scene as “an inside look at hell,” the user tagged Peele in a tweet along with the foreboding message, “you know what to do.”

Only 24 hours later, more frightening content began making its rounds on the internet. Further proving that the Trumps’ trip to the U.K. is a meme goldmine, a creepy photo of Ivanka Trump and Jared Kushner watching Trump’s official welcome from Buckingham Palace went viral.

Many noted that the couple looks like a horror scene, straight out of The Shining.

Why does EVERY SINGLE PICTURE of Jared & Ivanka look like the poster for an @A24 horror movie? pic.twitter.com/dh7JKIRsQQ

I added the photo of Jared and Ivanka looking out the window to a collage of V.C. Andrews novel covers and honestly it blends in really well. pic.twitter.com/DKDTSMiPwg

"And since then, every June, Ivanka and Jared appear again to haunt Buckingham Palace…"#TrumpUKVisit #StopTheBans pic.twitter.com/LkgPzeBnk7

Jared and Ivanka look like the child ghosts from The Others. pic.twitter.com/OpoucuWBWd

If Peele’s tweet is any indication, it looks like the next iconic horror film could possibly be inspired by a meme.