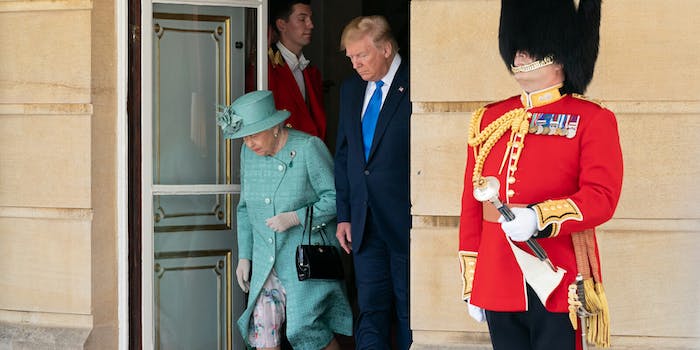 At one point, his limo got stuck because Larry the Downing Street cat was lying beneath it.

President Donald Trump arrived in London this week for his first-ever state visit to the United Kingdom. And it seemed just about everywhere people were laughing behind his back. Both online and in real life.

After meeting with Queen Elizabeth II at Buckingham Palace, the first stop on his trip, Donald and Melania Trump made their way to Clarence House to meet Prince Charles and Duchess Camilla for tea.

A video caught during this encounter shows Duchess Camilla jokingly winking at her protection officers as the two couples leave the room. If the wink was indeed a signal to her staff acknowledging the absurdity of this whole visit, Camilla may have perfectly summed up Trump’s entire U.K. trip with this small gesture.

Camilla’s wink is probably the best thing about this visit so far https://t.co/F7kJ6dTJ8K

But it isn’t just Camilla.

Trump’s three-day visit to the U.K. has barely begun and already the memes surrounding his stay are out of control. After all, the president did begin his visit by calling the mayor of London, Sadiq Khan, a “stone cold loser.” Did we really expect anything different?

.@SadiqKhan, who by all accounts has done a terrible job as Mayor of London, has been foolishly “nasty” to the visiting President of the United States, by far the most important ally of the United Kingdom. He is a stone cold loser who should focus on crime in London, not me……

British citizens, contending with their own major political turmoil, Brexit, found the time to welcome Trump to their country in some pretty creative ways.

Hi @realDonaldTrump. Just so you know, you’re wildly unpopular here in Britain. SAD! People REALLY don’t like you (though they love @BarackObama). Hope you like seeing your FAILING approval numbers projected onto the Tower of London. #TrumpUKvisit pic.twitter.com/oT332Fd6fE

Guess who's been busy today mowing a stiff message for Trump under the Stansted flightpath… Please share and let's see how far we can spread the welcome!#climatechange #Trump #welcometrump pic.twitter.com/crnZo5rnDv

Queen Elizabeth II had her own ways of dealing with Trump’s visit.

Fam. The Queen told Trump “there’s a Best Western next door.” I AM CRYING. https://t.co/WF4czDIGo1

She gave him a book hahahahaha https://t.co/BW1znUgWFZ

Even a feline British citizen, Larry the Downing St. cat, who serves the role of “chief mouser” of Downing Street, got in on the action, lying under Trump’s limo.

Some were worried that Trump’s obscene brashness would clash with the high decorum of the royal family.

Who wouldn't take Kate's picture and make lots of money if she does the nude sunbathing thing. Come on Kate!

Continuing his past few days of truly baffling attire, Trump was giving serious ‘middle school orchestra’ vibes as he consorted with the royal family.

An unacknowledged power Trump has is an incredible ability to suck all the dignity out of a room. Not only does he look oafish wherever he goes, but he exposes the natural oafishness of everyone around him. Just a remarkably clownish aura, stunning and to be feared. pic.twitter.com/01GhRYROGq

It isn’t just Trump who found himself becoming the butt of many jokes while across the pond. Seeing members of the Trump administration and his entourage in such a posh setting seems to really accentuate their ridiculous aspects.

wish I could find love like this. you can really tell how into each other they are https://t.co/PJI87Xosx2

As Trump’s visit continues, the memes surely will as well.

Let’s take a page from Duchess Camilla’s book and recognize the absurdity of this whole trip. Because, if nothing else, it’s providing some good laughs.