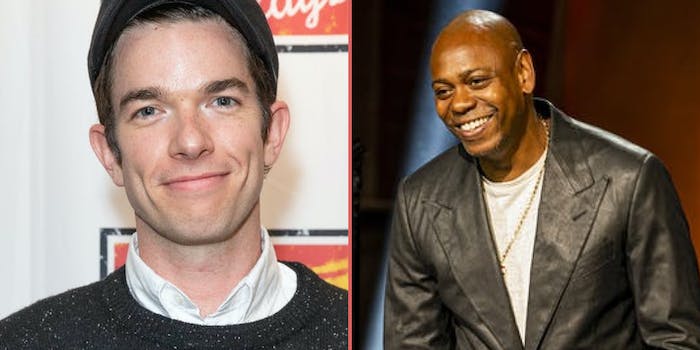 ‘Dave Chappelle ambushed us at the John Mulaney show’: The internet is in an uproar after the comic told a ‘transphobic joke’ when opening for Columbus stop on Mulaney’s tour

'Y'all ever hear ~12,000 people laugh at a transphobic joke, while you’re a trans person in the audience.'

Comedian John Mulaney has found himself in hot water for introducing a surprise special guest as an opener at one of his shows on his tour: Dave Chappelle.

Audience members at the show report that Chappelle opened his set with a transphobic joke and even made homophobic remarks to audience members, causing a wave of online backlash against the two comedians.

Dave Chappelle built a career in comedy by not shying away from hot-button issues and giving his honest take on anything and everything without pulling punches in consideration of anyone who might be offended by what he has to say. His opening episode of Chappelle Show featured a sketch about a blind Ku Klux Klan Member who had no idea he was Black. The bit culminates in him removing his hood and revealing to the White Supremacist group who he is, resulting in someone’s head exploding and him leaving his wife because she married a black man.

However, in recent years, he’s received criticism for including jokes that target the trans community. As a result, both Chappelle and Netflix, the streamer producing and hosting his recent comedy specials, faced major social media blowback, calls to boycott of the streaming giant, and even protests by employees who expressed their displeasure at Netflix for continuing to work with the comedian.

In May of 2022, Netflix released a culture memo to its workers instructing them to leave the company if they are offended by the content released on the platform. Online backlash against the comedian ramped up once again after Netflix announced it committed to producing four additional Chappelle-led specials in February.

After the ire incited by his 2021 comedy special, The Closer, a representative for Chappelle stated that the comic was open to dialogue with the trans community: “The streets are talking and Dave is listening. At some point, when everyone is open, I’m sure the communities will come together.”

The most recent outrage towards Chappelle is directed at his appearance John Mulaney tour show that occurred in Columbus, Ohio, not far from where Chappelle resides. This performance was a “locked event” in which audience members were asked to turn over their cell phones in order to gain admission, so there isn’t any footage of the jokes that were performed.

While the uproar toward Chappelle is nothing new, many people were disappointed a Mulaney’s affiliation with the comic. Several trans people in attendance shared their dismay with Chappelle’s surprise appearance at Mulaney’s show on Twitter.

“Y’all ever hear ~12,000 people laugh at a transphobic joke, while you’re a trans person in the audience who didn’t know the transphobic comedian would make a surprise appearance at the John Mulaney show? yeah. wasn’t fun. fuck you D.C.,” user @raegan_givant tweeted.

“My favorite part of tonight was when dave chappelle ambushed us at the john mulaney show, told a bunch of transphobic jokes, a massive stadium of people laughed, and then john mulaney hugged him at the end,” user @testosteronejew wrote.

Another Twitter user who says that they were in attendance shared the alleged jokes that caused outrage in a Twitter thread. He wrote that Chappelle made one transphobic joke where he quipped about a gun identifying as a knife.

He claims that the joke viewers called homophobic was a remark made to two twins in the audience whom he heckled, arguing that they weren’t twins but rather a gay couple.

Others noted that Mulaney has brought Chappelle on stage in the past, like at the Red Rocks Park and Ampitheater in Morrison, Colorado, where the comic reportedly “compared trans people to rapists and asked a girl with her service dog if she ever used peanut butter to get the dog to do oral sex on her.”

Some users accused Mulaney of using his previous reputation at a “Good White Guy” to appeal to marginalized people, before betraying them for money or “clout.”

“Celebrities who like to portray an image of a nice, politically conscious, cool-and-feminist guy almost always nope out when it gets inconvenient. You might say they have the moral backbone of a chocolate eclair. This is a tweet about John Mulaney,” user @chameleonghosts said.

In response, others urged fans to stop idolizing celebrities in order to prevent disappointment.

“Lads, just stop idiolizing famous people tbh. Every single one of them will disappoint you in some way. Critique them, yes or like them, yes. But we need to stop drawing an image of them being perfect. Like yis will collapse if Keanu Reeves turns out to be bad or Paul Rudd,” one user said.