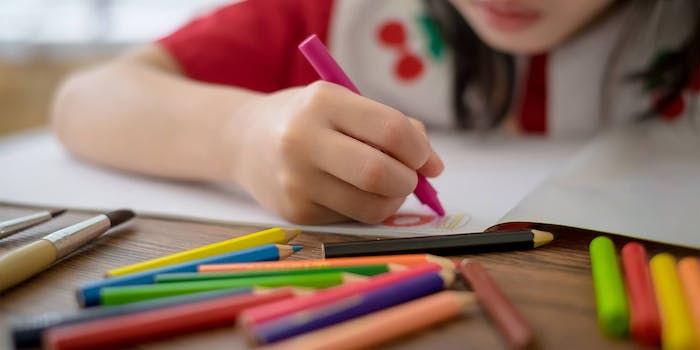 The publisher can use your artwork for any purpose, even if you don't win.

On Tuesday, J.K. Rowling announced that she was releasing The Ickabog, her first children’s story in more than a decade, first as free serialized chapters online before it’s published in more traditional formats. Rowling also introduced an illustration contest for young readers to help populate The Ickabog, but it doesn’t come without its own set of caveats.

News about The Ickabog illustration contest first came from Rowling herself via her Twitter thread in which she asked “children to illustrate the book for me.”

While Rowling noted that she wouldn’t judge the contest—which would take part in multiple publishing territories—she would happily retweet and comment fanart. (She also announced that she plans to donate all of her royalties to organizations helping those impacted by the COVID-19 pandemic.) And since she announced the contest, she’s been sharing and retweeting artwork on her Twitter account.

The contest is open to children between the ages of 7 and 12, and art must be submitted by July 17 (a week after the final installment of The Ickabog will be published). Each publisher will pick 34 winners, who will receive a signed copy of The Ickabog. Scholastic, which is operating the contest in the U.S., the District of Columbia, and Canada (excluding Quebec), will donate $650 worth of books to a school or library of each child’s choosing. Hachette Children’s Group, which is running the contest in the U.K., Republic of Ireland, Australia, New Zealand, and India, will donate £500 worth of books (or local currency equivalent) to a school or library.

But what isn’t as highly publicized surrounding the contest is what happens when a child submits their artwork for the contest to Scholastic or Hachette Children’s Group, which are detailed in each publisher’s official list of rules for the contest.

According to Scholastic’s list of rules, children who enter the illustration contest give Scholastic a royalty-free license to use their artwork however they choose—even if they’re not selected as one of the 34 winners—without offering any sort of compensation for those who submit their artwork.

If they are selected as a winner, they will be required to sign an agreement giving up all rights to their artwork to Scholastic, who then can “use, edit, adapt, modify, reformat, rearrange, combine with other materials, post, copy, distribute and exploit such Illustrations and all elements embodied therein, in any and all media now known or hereafter devised worldwide, in perpetuity, for advertising, promotional, marketing, trade and other purposes, without further compensation, notification or permission.”

Hachette Children’s Group list of terms and conditions have similar wording, in which entrants agree to give the publisher a royalty-free global license to use the work even if they’re not selected as the winner. By Hachette Children’s Group’s rules, children who submit their artwork “waive any and all moral rights in relation to the entry, including but not limited to the right to be identified as the author of such content and the right to object to derogatory treatment of it.”

The Daily Dot has reached out to Scholastic and Hachette Children’s Group for clarification.

To be fair, a lot of the jargon used in Scholastic and Hachette Children’s Group’s rules might be boilerplate and standard fanfare for a contest of this nature. But it’s also an indication of how potentially that wording can lead to someone—in this case, actual children—giving up their own copyright to something they’ve made just by entering a contest.

The publishers are essentially soliciting free artwork from children and will then have the ability to profit off of through marketing and the eventual publication of The Ickabog with no form of compensation outside of the group of winners. (While Rowling said she’d donate her royalties to charity, the publishers haven’t indicated that they would do the same.)

But for some, the possibility of being included in a book with Rowling, whose work is still fundamental for so many children around the world, is payment enough. It’s just a matter of weighing your options on whether the price is worth the potential prize.