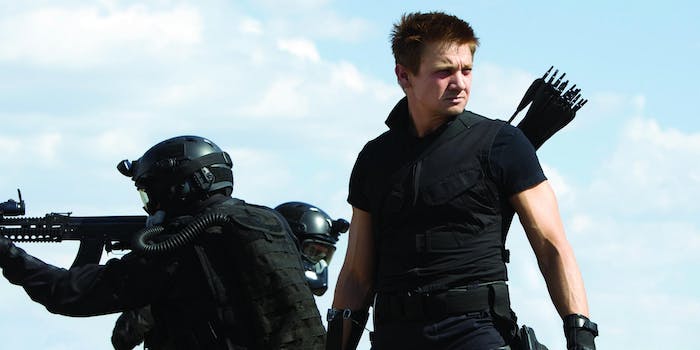 Does Jeremy Renner’s Hawkeye have a personality?

After five MCU movies, Hawkeye still feels like a generic action hero. Can the Disney+ show change that image?

Jeremy Renner has a weird brand of fame. Despite two Oscar nominations (!) and 15 years of high-profile roles, his public persona remains stolidly nondescript—so much so that it’s become a punchline. When his fandom app went viral in 2019, the main response was derisive disbelief: Why does Jeremy Renner even have an app? Even his dark side stays under the radar, with most people seemingly unaware of the domestic abuse allegations leveled by his ex-wife.

In the MCU, Hawkeye’s mediocrity mirrors Renner’s public image. As the only original Avenger without his own movie, he’s been around for a decade without really defining his brand. When the trailer for his Disney+ spinoff arrived this week, one viral tweet characterized it as a form of sunk cost fallacy: Marvel is “stuck with a guy they cast because he was on a six month hot streak back in 2010.” After five MCU appearances, it’s still unclear what Jeremy Renner’s Hawkeye stands for.

Tellingly, most positive reactions to the Hawkeye trailer celebrate things that aren’t Clint Barton. Fans are excited about Hailee Steinfeld, the Captain America musical, and the references to Matt Fraction and David Aja’s Hawkeye comics. The show also seems keen to get rid of Clint’s family, a defining part of his role in recent films. After sending his wife and kids home, he embarks on an adventure with his new protégé Kate Bishop (Steinfeld).

In spite of details like his vigilante stint as Ronin in Avengers: Endgame, MCU Hawkeye suffers from a lack of connection to the comics. While the other Avengers are rooted in long-running Marvel lore, Joss Whedon introduced Hawkeye as a generic special forces guy who happens to use a bow and arrow. As a S.H.I.E.L.D. agent whose best friend is Black Widow, his background reflects some elements of comic book canon. But in terms of personality, he’s a straight-to-DVD action hero. Even his costume is subdued; a bulletproof vest that barely hints at Hawkeye’s traditional purple outfits.

Introduced in Avengers: Age of Ultron, Clint’s family clashed with his tough MCU image—and with his classic characterization as a cocky but likeable guy who dates around. The MCU also erased his quirky working-class roots as a circus performer, leaning into the franchise’s military themes instead. The movies abandon his usual personality traits (the outside-the-box strategist; the easygoing rebel) because those roles are filled by other characters.

In the same way that fans are more excited for Hawkeye-the-show than Hawkeye-the-character, Clint’s MCU fandom is oddly divorced from canon. People wrote a ton of Hawkeye fanfic after Thor and The Avengers, mostly shipping him with Agent Coulson—a relationship based on 47 seconds of shared screentime. For a while, this was the third most-popular MCU pairing on the fanfic site AO3. Fans invented emotional depth to make up for Clint’s shallow on-screen role, often taking cues from the comics. Then as the MCU continued to portray him as a generic action hero, giving him a cookie-cutter family that no one really cared about, fans gradually lost interest. Hawkeye just doesn’t have a compelling emotional hook.

It’s weirdly hard to tell where Hawkeye falls on the MCU’s moral spectrum. While Black Widow embraces moral ambiguity, Hawkeye’s uneven characterization pulls him in different directions. There’s a stark divide between his depiction as a wholesome dad and his career as a government-contracted killer. And instead of having a distinctive origin story or motivation like the other Avengers, he joined the team because he’s following orders. Basically, MCU Hawkeye displays none of the emotional or moral themes that we associate with superheroes. This creates a tricky situation for the Hawkeye TV series, whose comic-book inspiration differs greatly from the MCU.

In Matt Fraction and David Aja’s Hawkeye comics—a 22-issue run that began in 2012—Clint Barton is a normal guy who lives in a cluttered apartment with his dog. As the only Avenger without superpowers or expensive equipment, he feels alienated from his teammates. He’s a nice person but he’s also kind of disaster-prone, and while these comics are often comedic, they depict Hawkeye dealing with realistic mental health issues. The purple color scheme creates a depressive, washed-out atmosphere, juxtaposing Clint’s goofy persona with his loneliness and self-destructive tendencies. It’s a nuanced, emotional story that absolutely deserves its critical acclaim. But there’s very little overlap with the MCU’s version of Hawkeye.

The Hawkeye trailer is full of references to these comics, casting Kate Bishop as the co-star in an urban conflict with Eastern-European gangsters. This quasi-reboot highlights one of the biggest hurdles for Marvel’s Disney+ spinoffs: Unlike the comics, they can’t be standalone stories. Hawkeye can capitalize on imagery from the Fraction/Aja comics, but it can’t explore the same themes because MCU Hawkeye is a fundamentally different character. This places a big question mark over the show’s potential for success. Can it use Jeremy Renner as a blank slate for a bold new angle, like WandaVision did with Scarlet Witch? Or will it be held back by Hawkeye’s MCU baggage?