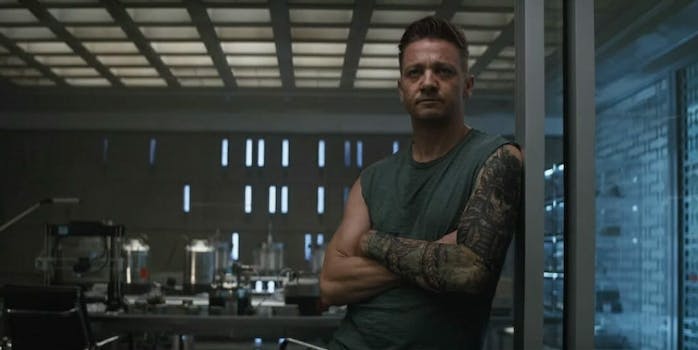 What’s up with Hawkeye’s tattoo in the new ‘Avengers: Endgame’ trailer?

Tickets just went on sale for Avengers: Endgame, so Disney released a brand new trailer Tuesday morning. It’s obviously light on meaningful details about the movie, but it does include some brand new footage including the Avengers in space with the Guardians of the Galaxy, and Captain America and Tony Stark making amends after their Civil War split.

Oh, and Hawkeye has a very ostentatious new tattoo.

Not to make light of Hawkeye’s very real (fictional) trauma, but his Endgame makeover is pretty funny. Earlier trailers introduced his carefully styled new mohawk haircut, and now he’s unveiled a massive full-sleeve tattoo. We assume this is his way of expressing grief over Thanos’ finger-snap and (probably) the death of some family members, but it’s also… very white-guy-midlife-crisis.

Depicting what appears to be a samurai skull, the tattoo is a reference to Hawkeye’s alias Ronin, a loosely samurai inspired identity that he (and other heroes) adopts when working as a lone vigilante.