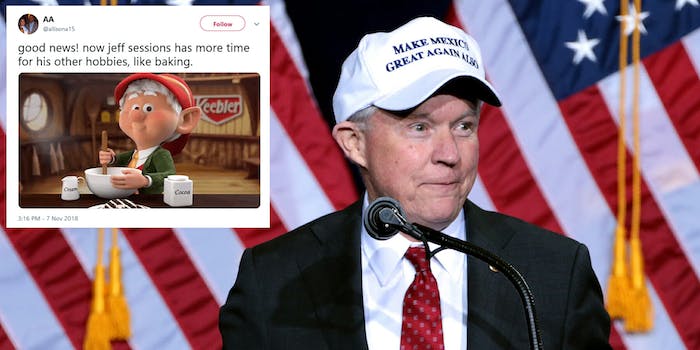 The jokes were plentiful.

The resignation letter was given to Chief of Staff John Kelly on Wednesday, BuzzFeed News reports. In the letter, Sessions says that he resigned at the request of the president.

“I have been honored to serve as Attorney General and have worked to implement the law enforcement agenda based on the rule of law that formed a central part of your campaign for the presidency,” Sessions wrote.

Trump announced the resignation on Twitter on Wednesday afternoon, adding that Matthew Whitaker, Sessions’ chief of staff, will take over as Attorney General on an interim basis.

We are pleased to announce that Matthew G. Whitaker, Chief of Staff to Attorney General Jeff Sessions at the Department of Justice, will become our new Acting Attorney General of the United States. He will serve our Country well….

Sessions, a former senator from Alabama, was one of the president’s earliest backers in his run for the presidency in 2016. However, since then, Trump has lashed out against the former Attorney General, particularly in his handling of Special Counsel Robert Mueller‘s investigation.

While there are serious implications into how Mueller’s probe will be handled going forward, many people took a moment to poke fun at Sessions’s apparent dismissal.

Fucked up that they're going to turn Jeff Sessions into one of these but what's done is done pic.twitter.com/Etp7y2vS5m

Jeff Sessions has resigned as Attorney General at the request of Donald Trump. pic.twitter.com/qH4Ww5mvOQ

good news! now jeff sessions has more time for his other hobbies, like baking. pic.twitter.com/TL8225KHaU

clues that that Sessions' resignation was long in the planning:
-letter undated
-refers to "the new states of Arizona and New Mexico"
-congratulates Babe Ruth on 1st career home run
-offers condolences to Lusitania victims
-stamp on envelope one of those upside-down airplanes