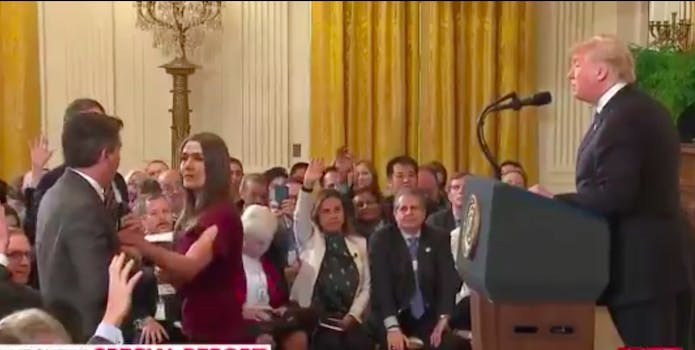 It's not really, though.

President Donald Trump held a press conference in the wake of the 2018 midterms that was filled with his standard set of hyperbolic boasting, airing of personal grievances, and attacks on his opponents.

And like all his other press conferences, it included another Abbott and Costello routine with CNN’s White House chief correspondent Jim Acosta.

Early in the conference, Acosta—who has routinely grandstanded about his mistreatment by the president and his supporters—asked Trump—who has routinely attacked Acosta and his network—about the immigrant caravan.

This went off the rails immediately, and led to Acosta and Trump lobbing accusations at each other, with Trump calling Acosta a “terrible person,” and Acosta refusing to cede the mic when Trump tried to move on.

And because even our arguments about vapid media spats must be viewed with a hyperpartisan lens, this devolved into bickering online.

The video shows an assistant attempting to remove the mic from Acosta, as requested by her boss, the president of the United States, and the same video shows Acosta swatting her away.

Naturally, Trump supporters went after Acosta for his behavior and attacked NBC for how it framed the exchange online.

BREAKING: White House aide grabs and tries to physically remove a microphone from CNN Correspondent Jim Acosta during a contentious exchange with President Trump at a news conference. pic.twitter.com/fFm7wclFw2

Jim Acosta refused to give up the mic, was incredibly rude to the President of the United States, and pushed a female White House aide, but sure @NBCNews go with that… https://t.co/heZDFiQ2uj

1st A:
Congress shall make no law respecting an establishment of religion, or prohibiting the free exercise thereof; or abridging the freedom of speech, or of the press; or the right of the people peaceably to assemble, and to petition the government for a redress of grievances. https://t.co/28DDL1UhEi

Where did he push her? https://t.co/ncfvvK9jgI

There’s no need to argue this at all.

Acosta was wrong for refusing to relinquish his time. He could have just passed over the mic, knowing that anything he asked at the conference wasn’t going to get Trump to offer a mea culpa over his continued admonishments. Whatever grievance Acosta has with this administration isn’t going to be resolved by him thrusting a pocket Constitution in the president’s face. Acosta, though, loves playing aggrieved media man and even retweeted a picture of the exchange.

@realDonaldTrump looks on as a White House aide attempts to take away a microphone from CNN’s @Acosta during a news conference. pic.twitter.com/hKehies5Zh

For his part, the president has been wrong to lob harsh rhetoric at the media in general, and Acosta and CNN in particular. He does it because it plays well with his base, despite it going against one of the fundamental tenets of American government. And no matter how much he attacks the media, they aren’t going to stop doing their job.