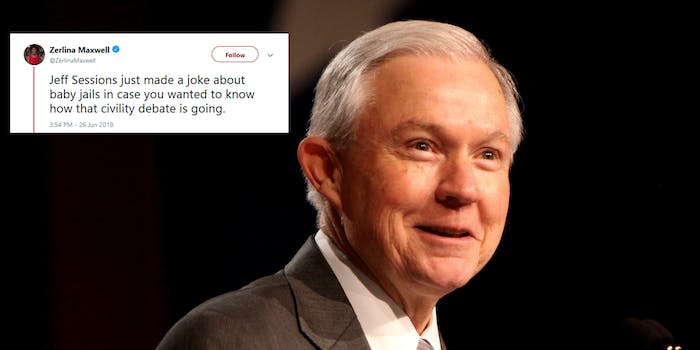 Chelsea Clinton called the reaction to the joke an example of 'indecency and incivility.'

Attorney General Jeff Sessions was blasted online after he joked about people who disagree with President Donald Trump administration’s policy of separating undocumented immigrant children from their families.

Sessions made the joke while making a speech before the Criminal Justice Legal Foundation on Tuesday, the Hill reports. The attorney general tried to joke about the “hypocrisy” among those who disagree with the practices of the Trump administration’s “zero tolerance” immigration policy.

“The rhetoric we hear from the other side on this issue, as on many others, has become radicalized. We hear views on television today that are on the lunatic fringe, frankly,” the attorney general said, before setting up his joke. “And what is perhaps more galling is the hypocrisy. These same people live in gated communities, many of them, and are featured at events where you have to have an ID to even come in and hear them speak. They like a little security around themselves.”

Then, he cracked his joke:

“And if you try to scale the fence, believe me, they’d be even too happy to have you arrested and separated from your children,” he said, as the crowd clapped. “They want borders in their lives, but not in yours. Not in the American people’s lives.”

The Trump administration has been fiercely criticized in recent weeks for as stories, audio, and video has come out showcasing how undocumented children have been separated from their families at centers along the southern border of the United States.

As the calls of protest grew louder, the president signed an executive order directing agencies to end the practice that his administration was enforcing.

Several high-profile personalities slammed the attorney general for his joke.

MSNBC host Mika Brzezinski said the remarks were “just not funny,” and added that it was “chilling” that people laughed and clapped at it, Raw Story reported.

Chelsea Clinton said the reaction to the attorney general’s joke was a sign of “indecency and incivility.”

You want to know what indecency and incivility sound like? People laughing and applauding at the “joke” about forcibly separating parents from their children. https://t.co/4A81UKymPY

Jeff Sessions just made a joke about baby jails in case you wanted to know how that civility debate is going.

Attorney General Jeff Sessions jokes about separating parents from their children and their are people clapping for him, WHITE OLD MEN CLAPPING AND LAUGHING. This is not a laughing matter, children still crying for parents. We need to vote this horrible men out.

So Jeff Sessions thinks it’s funny we’re ripping babies from their mothers arms. Please Republicans NEVER tell me how your morally superior to Dems again. Every one of you that’s cool with cruelty then to rub it in and then makes jokes can burn in Hell. I’ve got nothing for you!