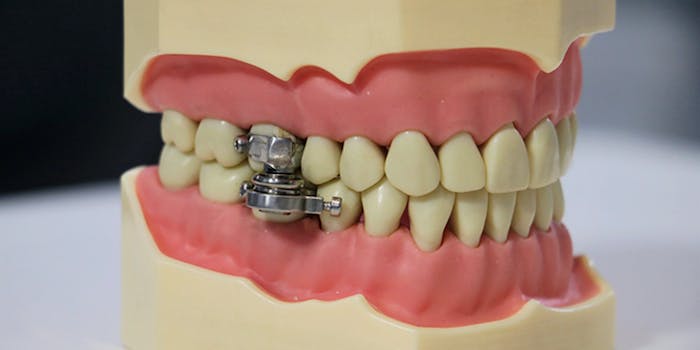 The device connects to the upper and lower back teeth.

There’s a reason why weight loss is a multi-billion-dollar industry, as no shortage of fad diets from Kardashian-stamped tummy teas to keto nutrition plans can attest. But researchers in the U.K. have now come up with a weight loss device so absurdly archaic that it involves magnetically locking the user’s jaw so they can only consume a liquid diet.

Magnets! Yeah, bitch, magnets! The “DentalSlim Diet Control” was created by a team of University of Otago researchers as an “intra-oral device” that affixes magnets to the upper and lower back teeth. It prevents the wearer from being able to open their mouth more than two millimeters, so they must adhere to a liquid diet. But at the same time, it allows the wearer to talk and breathe freely—and can be released in the case of an emergency.

Professor Paul Brunton, the lead researcher on the projects, claims that the device will be “an effective, safe, and affordable tool” for battling the global obesity epidemic. Rather than a fad diet, the team sees it as a tool for those who need to quickly drop weight before surgery, such as bariatric.

The practice of jaw wiring as a diet fad is not unprecedented. Heck, Tami from The Real World: Los Angeles even had it done while she was on the show! After rising in popularity in the ’80s, however, jaw wiring sort of fell out of fashion for obvious reasons. Though Brunton and his team say that the thing that sets their device apart is that it eliminates the risk of literally choking to death from vomiting, haven’t we as a society … moved past this?

Sure, trends from the ’80s and ’90s seem to be in a constant state of regeneration, but this seems like one that we can firmly leave in the past with waterbeds and god knows what else.

And as the University of Otago’s tweet announcing the jaw-locking device began to go viral, people on Twitter began expressing their shock and horror. As many have pointed out, there seems to be a certain degree of fatphobia involved to take such extreme measures for weight loss.

Others were less restrained with their criticism, such as Imani Gandy. “What the shit is this?” Gandy wrote, perhaps saying it best. “A chastity belt for your mouth??”

You and us both. The odds that people don’t abuse this thing seem slim to nil. A fool and their money may soon be parted, as the saying goes, but magnetically locking your jaw shut is priceless??