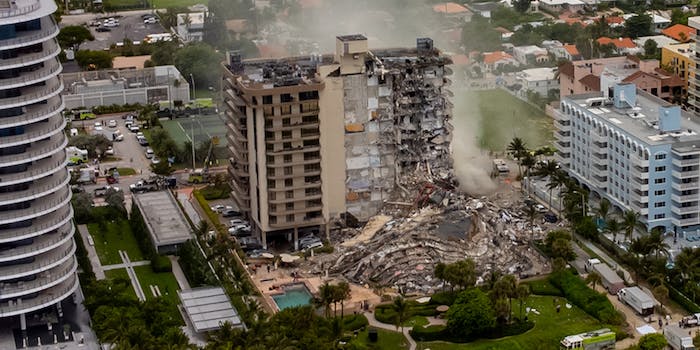 The accepted explanation seems logical, but some don't want to believe it.

Far-right figures are circulating a dizzying array of conspiracy theories about the devastating condominium collapse in Surfside, Florida.

In the early morning hours of June 24, Champlain Towers South collapsed in a matter of seconds. As of Monday morning, the official death toll is nine; 152 remain unaccounted for. No survivors have been pulled from the rubble in days.

While the cause of the collapse remains uncertain, there have been multiple reports of potentially contributing factors.

In the 1990s, a researcher at Florida International University reportedly found that the building was sinking at a rate of a few millimeters a year, USA Today reports. NBC News reported that an engineer warned that failed waterproofing was causing “major structural damage” beneath one of the pool decks three years ago. “Failure to replaced the waterproofing in the near future will cause the extent of the concrete deterioration to expand exponentially,” the report said. That report identified other possible sources of water infiltration and additional evidence of deterioration. The building was also undergoing roof repairs at the time of the collapse.

These entirely plausible causes of the tragic collapse simply will not do for conspiracy theorists and their followers. On social media, far-right figures and groups are circulating theories that the collapse was a false flag or act of terrorism; that it was a targeted job to silence someone, or perhaps a group, who were up to something those responsible didn’t like.

Those circulating these theories include the likes of Charlie Kirk, Laura Loomer, and Tracy “Beanz” Diaz.

Kirk claimed on Twitter that several architects told him they believe it wasn’t “an act of nature,” but “domestic terrorism.”

Notorious conspiracy theorist Loomer similarly claims it was a controlled demolition. Loomer, who is not an engineer, architect, or expert in building science, posted on Telegram, “That was an explosion. Buildings don’t just collapse!” She also falsely posited that media was refusing to ask if the collapse was an act of terrorism.

Subscribers to her Telegram channel rushed to offer their own twists on the conspiracy. One likened it to the Nashville bombing last year, which attracted its own wild theories. Another compared it to the World Trade Center. Many have compared the collapse to the 9/11 terrorist attacks, the Oklahoma City bombing, and other such acts.

“We will never get the truth,” lamented one of Loomer’s subscribers.

On the Dark to Light podcast’s Telegram channel, QAnon early adopter Diaz says that video of the collapse shows “flashes,” which she takes as evidence of an explosion and not merely the reflection of lights or sparks of electricity as the building fell.

“Yes there were three I saw,” one of her subscribers commented.

Interestingly, some comments in the thread about the collapse urge people to send responses linking it to “Q stuff” in private messages, which could be evidence that QAnon conspiracy theorists are taking their beliefs underground.

A conspiracy theory that has gained significant traction is that the collapse was linked to the suicide death of John McAfee, partly based on debunked reports that he owned a unit in the building and McAfee’s actual claim that he had a substantial amount of data exposing government corruption.

Conspiracy theorists falsely believe that McAfee was keeping the files at the condo. Rather than simply retrieve them, they think that the government destroyed the building.

The Associated Press reports that someone even photoshopped a fake tweet that appeared to be from his account to support the theory. “If anything ever happens to me, please know that the 31TB of files I have are located on hard drives in my condo near 88th Street and Collins Avenue just north of Miami Beach,” it read.

Other QAnon followers have latched onto Michael Flynn’s recent claim that a false flag attack was planned to take attention away from efforts to discredit the Arizona election outcome.

“Don’t we think the condo collapse down here in Florida is a false flag?!” opined one on the Band of Brothers Q Telegram channel.

Tragedies, even those captured on camera, almost always attract conspiracy theories. In coming days, weeks, and possibly years, conspiracy theorists like Loomer, Beanz, and others will no doubt continue to circulate their own beliefs as to what was “really” behind the collapse of Champlain Towers South in Surfside, Florida.

Meanwhile, a possible likely culprit, climate change, is being ignored as it doesn’t comport with their worldview.