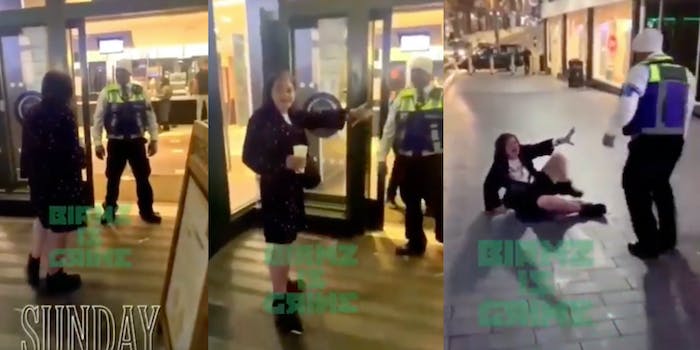 The security guard chases after her and beats her up in the viral video.

A bizarre incident in front of a McDonald’s in Birmingham, England, in the early hours of Sunday morning is getting worldwide attention. It involves a woman, captured on video, throwing a drink at a security guard in front of the fast-food restaurant, and the security guard chasing after her and beating her up.

The video shows the woman approaching the front entrance of the McDonald’s, pausing, and then deliberately tossing the contents of the drink at the security guard.

He immediately grabs what appears to be a baton, runs after her, and strikes her once with the baton. She then falls, and he kicks her several times and strikes her again with the baton. After the initial wave of violence, he walks away, but the woman appeared to anger him further as she started to get up, and he returned for a second round.

The video was initially posted to the Birmz is Grime Twitter account, showing a bit of the exchange prior to the violence.

It was shared on several Twitter accounts, including @JamieRightly, who saw the incident and the subsequent social media reaction as a sad statement on the United Kingdom.

“Woman throws drink at McDonald’s security guard in Birmingham,” he noted. “He then grabs a weapon to beat her and kicks her in the face. The people watching and filming think it’s entertaining.”

He then asked, “What has happened to our country?”

Some reacted by siding with the security guard, including one observer who opined, “She deserved every single blow; what gives her the right to throw substances at people? This could’ve easily been acid or urine, or boiling water with sugar.”

However, others thought the security guard’s actions were extreme, with one person blaming the restaurant chain.

“Poor show @McDonaldsUK!” that person wrote. “Yes, the woman’s not innocent, but that’s an over the top reaction.”

In addition to getting attention on Twitter, the story also got picked up by a number of tabloids. Metro, in its coverage, noted that police are investigating the incident based on the video evidence making the rounds.

A McDonald’s spokesperson said, as reported by the publication, “This incident is subject to an ongoing police investigation. We have a zero-tolerance approach to violence or abuse of any kind and will cooperate fully with police inquiries.”