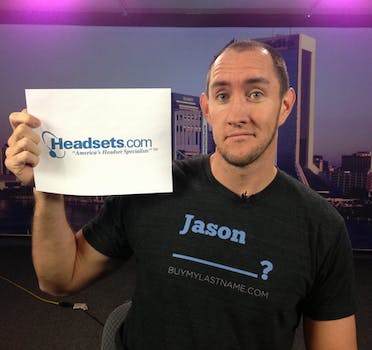 For $45,000, this guy changed his name to Headsetsdotcom

Jason Sadler announced last week that Headsets.com had purchased the rights to his name for $45,000. The Jacksonville native, a communications specialist with a bachelor’s degree in graphic design from the University of North Florida, will take on the name Headsetsdotcom for the full 2013 calendar year—so long as a judge approves of the change in court.

Sadler told Fox News on Thursday that Headsetsdotcom barely edged out Pawnupdotcom for the rights to change his name.

“They went back and forth and had a little bidding frenzy, literally to the minute,” he said. “I pressed the button, closed it down, and Headsetsdotcom wanted it.”

According to CNN, the man intends to reinvest the money into “other fun marketing things” and give 10 percent to charity.

“I just saw an opportunity,” Sadler, 30, told CNN. “My mom is going through a divorce and I don’t need this last name anymore. I thought ‘How am I going to find a new last name?’ Well, why not just sell it?”

Sadler has been keeping followers updated on the name change via his personal website, which featured a post on Friday titled “A look at my first day with the name Jason Headsetsdotcom.”

“Technically I’m not changing it until January 1, 2013, but let’s be honest,” he wrote. “I’m terrible at waiting for things.”

This is not the first time that Sadler has been in the news because of his involvement in a wild marketing ploy online. In 2009, Sadler raised $65,000 wearing other people’s T-shirts, thanks to his development of iwearyourshirt.com, a site he still runs today.