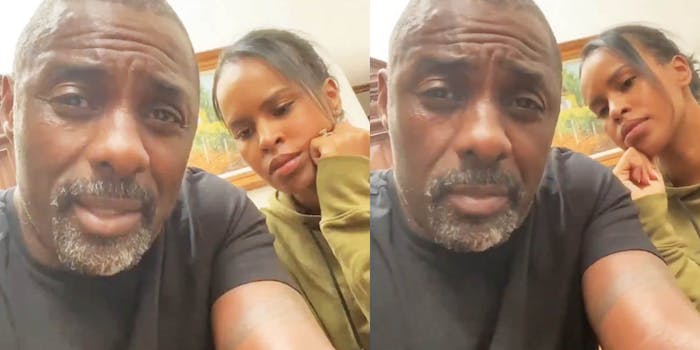 People are not taking the news well.

It’s kinda odd, if you think about it, how something as universally terrifying as a global pandemic can bring us all together. Perhaps, this is because it affects us all the same, and no one is immune to the disease—from our friends and neighbors to beloved celebrities like Tom Hanks. And now, British actor Idris Elba has likewise revealed that he has become afflicted with coronavirus.

“This morning I tested positive for COVID-19,” Elba tweeted early Monday afternoon. “I feel OK, I have no symptoms so far but have been isolated since I found out about my possible exposure to the virus. Stay home people and be pragmatic.”

In a video accompanying the tweet, Elba appeared alongside his wife of less than one year, Sabrina Dhowre. He said he decided to get himself tested after learning on Friday that he had been in contact with someone else who later tested positive—and that he had quarantined himself ever since. Dhowre has not yet been tested for the virus. Although if she’s ostensibly been in self-quarantine with her husband, one would have to assume the worst-case scenario, given how communicable the disease is.

Elba went on to say that the couple has spoken to their family and colleagues about the positive test and reiterated that transparency is the best thing right now.

“If you’re feeling ill, you feel like you should be tested or you’ve been exposed, do something about it,” he continued. “Alright? It’s really important. Look, we live in a divided world right now … but now’s the time for solidarity, the time for thinking about each other.”

Given the actor’s popularity, many folks were understandably dismayed to learn that Idris Elba had contracted COVID-19, and sounded off accordingly. Some, with GIFs of the man himself!

“They got Stringer…” tweeted one person, in reference to the death of Elba’s character on The Wire.

Others, including Sunny Hostin, Flea, and Ben Stiller, commended Elba for getting tested and coming forward with the results—particularly, given his lack of symptoms.

Now that the United States is believed to be just 11 days behind Italy in terms of the pandemic—where the casualties have now reached over 2,100—this is advice we can all stand to learn from. Here’s wishing Idris Elba a speedy recovery.