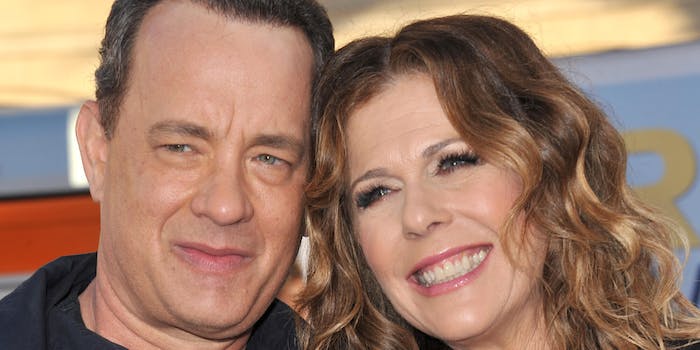 'Remember, despite all the current events, there is no crying in baseball.'

Tom Hanks and his wife Rita Wilson have the coronavirus.

The famous couple was diagnosed with the virus while in Australia, where Hanks is working on the set of Baz Luhrmann’s Elvis Presley biopic. They’ve been in isolation for more than 24 hours and shared an update from their voluntary quarantine.

Thursday night, Hanks shared a photograph of the couple to social media. Alongside a photo of the duo looking calm and casual, he wrote an encouraging message. “Hello folks. @ritawilson and I want to thank everyone here Down Under who are taking such good care of us,” he wrote. “We have Covid-19 and are in isolation so we do not spread it to anyone else. There are those for whom it could lead to a very serious illness. We are taking it one-day-at-a-time.”

“There are things we can all do to get through this by following the advice of experts and taking care of ourselves and each other, no,” he continued. “Remember, despite all the current events, there is no crying in baseball.” He concluded the message with his trademark sign-off, “Hanx.”

Fans of the duo flooded his social media pages with well-wishes. “I love honest, strong people,” one commenter wrote. “Thanks for sharing your experience. You are the best and I wish you a safe journey through this.”

The couple, both 63 years old, fall into the category of people with higher risk. While the virus can be dangerous to anyone, it is primarily a concern for people over 50 or with chronic medical conditions. The only thing that places Hanks and Wilson into the high-risk category is their age.

The fact that neither Hanks or Wilson appears concerned is doing a lot to put people at ease. While there were plenty of worried people commenting on his post, many people instead turned to humor.

Castaway jokes abounded. People just couldn’t get over the idea that, for the second time, Hanks is isolated with a companion named Wilson.

Some people were too fixated on how great Wilson looks, even with coronavirus, to feel overly concerned. “Rita looks better with Coronavirus than I do after a blow out and full face of makeup,” one commenter wrote.

Through all the jokes and movie references, peoples’ love and concern shone through. Fans of both Hanks and Wilson seem to be hanging on every update.

More than 120 cases of coronavirus have been confirmed in Australia, according to the World Health Organization. Hanks and Wilson may have inadvertently exposed a number of people before realizing they were sick. As reported by CNN, Australia’s Nine Network went into crisis mode following Wilson’s Monday appearance there. Wilson also performed for a crowd of around 200 hundred people at the Sydney Opera House on Saturday. The Opera House is hard at work disinfecting and tracking down anyone who may have been exposed.