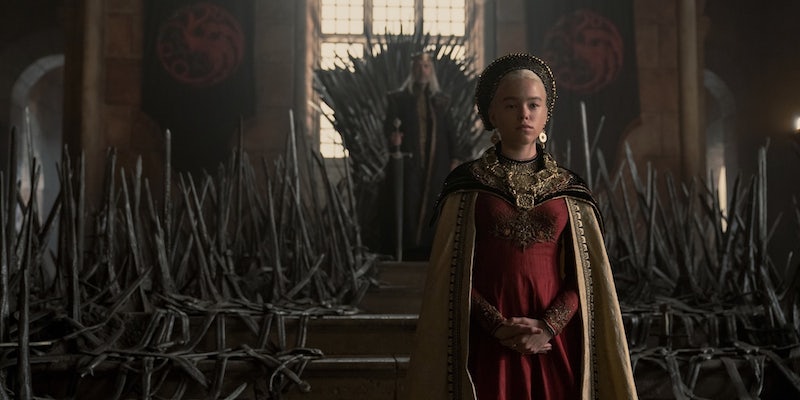 Review: ‘House of the Dragon’ takes the Targaryen’s complicated and messy history head-on

Even as it can't shake the feeling it's in a holding pattern for the show it will become.

House of the Dragon, the first of several hopeful “successor shows” from HBO to stake its claim on TV’s Iron Throne, arrives in a much more crowded landscape, and with higher expectations than its predecessor ever had upfront. It goes beyond just how much TV (especially blockbuster fantasy TV) people have to choose from these days or how people expect later Game of Thrones spectacle at the start of those other shows. House of the Dragon, whether unfairly or not, is facing an uphill battle: Three years on, the end of Game of Thrones is rather, shall we say, divisive. And that’s putting it mildly.

House of the Dragon

Release Date: Aug. 21, 2022
Creators: Ryan Condal and George R.R. Martin
Streaming: HBO Max
Centered on a particularly tumultuous time during House Targaryen’s dynasty, ‘House of the Dragon’ is an even denser blend of world-building and lore than its predecessor. The visuals and attention to detail are as spectacular as you’d expect, and it has some great performances, but it can come off as a season-long buildup to another show waiting in the wings.

Created by Ryan Condal (Colony) and George R.R. Martin—and with Miguel Sapochnik, the director behind “Hardhome,” “Battle of the Bastards,” and “The Long Night,” serving as co-showrunner—House of the Dragon is both the beast you know and an entirely different one altogether. Some of the names and places will be familiar and some of the realm’s concerns will be similar to what Game of Thrones’ rulers were concerned about; if you were a fan of the show’s most lore-heavy conversations, House of the Dragon has them in spades. But the close examination of the varying factions of one family’s ascent into power—or descent from it, depending on whose side you take in the simmering conflict that’s all but promised—over several years is brand new, usually marked by a bit of clunky yet helpful expository dialogue marking how much has passed since the previous episode; sometimes it’s a matter of months, other times, it’s years. Yet, as intriguing as House of the Dragon can be, it also inspires the feeling that it’s an intricate (and expensive) season of setup before it can get to the much bigger story it wants to tell.

It’s not completely House of the Dragon’s fault. The show is based on Martin’s 2018 tome Fire & Blood, which covers about 150 years of Targaryen history, which is defined by the near-god-like power riding dragons gave them, struggles over succession, and a whole lot of sanctioned incest. The civil war at the center of the show, the Dance of the Dragons, leaves behind a sizable body count in its wake, but the roots of that conflict—along with the nature of how the story is told in Fire & Blood, rely on three biased (and not always reliable) sources—go back decades. Those contradictions let Condal and his writing team not only depict the events of what “actually” happened, but also explore the messy gray area in-between those contradictions.

In House of the Dragon’s opening minutes, it takes viewers to the Great Council of 101 AC, where the realm’s lords voted that Viserys (Paddy Considine), the eldest male grandson, would succeed the elderly King Jaehaerys I Targaryen (Michael Carter) over the king’s eldest grandchild Rhaenys (Eve Best), setting the precedent in the eyes of some that a man’s claim to the Iron Throne will be accepted over a woman’s. Jaehaerys’s logic, we’re told in a voiceover, was to prevent a war over succession, but “the only thing that could tear down the house of the dragon was itself.”

When we reconvene with Viserys, now comfortably king for nearly a decade and well aware of what kept House Targaryen in power, he is something of a people-pleaser, a ruler who’s more interested in avoiding any kind of conflict, especially when it involves members of his own family. Daemon (Matt Smith with peak smarm and swagger), Viserys’ hotheaded younger brother whose open thirst for power is visible even to the unobservant, is often a major thorn in the king’s side.

It’s this unease, along with far more insensitive comments down the line, that lead Viserys to throw tradition out the window and appoint his only child Rhaenyra (Milly Alcock) as his heir. But even as the matter of succession is settled in Viserys’ mind, his advisors still hound him to produce male heirs, and once sons come into the picture, to push Rhaenyra out of the line of succession to return to tradition and precedent; Rhaenys even tries to warn her that no one will accept her as queen because refused to accept her.

Legacy and the matter of succession were always major elements of Game of Thrones, but House of the Dragon has it at the forefront of many conversations. Viserys is obsessed with what the history books will write about him. Rhaenyra has no interest in getting married, and whenever Viserys pushes for her to marry to further cement her claim to the Iron Throne, she resents it all the more. “My father seems content to sell me off to whichever lord has the biggest castle,” she bitterly tells another character on the matter.

As she sees it, marriage and her duty to have children are akin to a death sentence: Not just because she may hate her husband or he may mistreat her (both of those things which are entirely possible in Westeros, a realm that’s especially unkind to women), but also in that bringing a child into the world could literally kill her, conversations that will undoubtedly harken comparisons to the often draconian state of reproductive healthcare in a post-Roe world. Oftentimes, it’s this “battlefield” where some of House of the Dragon’s more horrific scenes take place, and even when a birth doesn’t result in the mother and/or the baby’s death, the show doesn’t shy away from how traumatic and painful the aftermath of giving birth is.

Like anyone residing in Westeros, everyone has their own interests in line, and it’s not necessarily from the names Game of Thrones fans would recognize. Otto Hightower (Rhys Ifans), the hand of the king, presents his daughter Alicent (Emily Carey)—and Rhaenyra’s best friend—as an initially unwitting chess piece who eventually becomes more than a mere pawn; she’s looking to move her own pieces forward. Corlys Velaryon (Steve Toussaint), the confidant head of the other Westerosi house with ties to old Valyria, is one of the richest men in the realm and whose good graces even the king takes care to remain in. Mysaria (Sonoya Mizuno), who comes from the free city of Lys and is Daemon’s paramour, is striving for liberation from fear and has little patience for petty Targaryen games. And Ser Criston Cole (Fabien Fabel), a member of the Kingsguard who hails from Dorne, pledges his sword to the crown but ends up tangled in the growing web anyway.

Halfway through season 1, House of the Dragon’s timeline takes a 10-year jump into the future, and a la The Crown, different actors step into Rhaenyra (Emma D’Arcy) and Alicent’s (Olivia Cooke) royal shoes. The amount of venom that the once-friends have for one another is palpable as years of resentment and bitterness were allowed to fester. We only get to see the hint of what D’Arcy and Cooke are capable of in these roles while the main men in their orbit are played by the same actors, so their presence is full of what’s to come. (HBO provided critics with six of season one’s 10 episodes.) But the hint of what they’re capable of lingers in the distance.

The attention to detail throughout House of the Dragon is astounding. The costume work and production design aren’t much of a surprise; Viserys’s detailed, stone-carved layout of Valyria, one that grows bigger as time goes on, is a highlight. But the world-building also comes visually. In one early scene, a fully grown dragon flies over King’s Landing in a similar pathway as Drogon’s fiery destruction in “The Bells,” but instead of pure terror, the scene is mostly met with indifference from the crowd below; these people are well-used to dragons. (Sapochnik “The Bells” and House of the Dragon‘s pilot.) The dragons are introduced slowly—we spend the most time with Caraxes, Daemon’s red dragon—and they’re just as visually dazzling as before. But occasionally, the show is plagued with the same flat and murky visuals that come with other shows that employed the Volume.

As I made my way through House of Dragon, I was entirely engrossed with all of the world-building and lore, but I also wondered if this was a show that would interest people beyond the show’s core audience. It’s full of nods to even the smallest of details in Fire & Blood to excite book fans and features several scenes of two or more characters in a room trading long-forgotten histories. With House of the Dragon’s structure, it gives off the feeling that it’s in a holding pattern as it gives viewers the vital information to set up the upcoming civil war—a war that it could very well be holding off until an eventual (and as of yet unconfirmed) season 2. Yet the entire arcs of some characters, only minor players in the story, come off as abrupt as their fates play out in a single episode, so the connection we form with them is fleeting; it’s comparable to the briefest mention on the pages of a history book. And while we spend much more time with these characters and see how they grow over the years, the emotional connections are sometimes harder to forge than its predecessor.

House of the Dragon has a lot riding on its back. It’s a slower and more intricate story this time around, but it has more than enough to sink your teeth into.

House of the Dragon premieres on Sunday, Aug. 21. New episodes debut every Sunday.