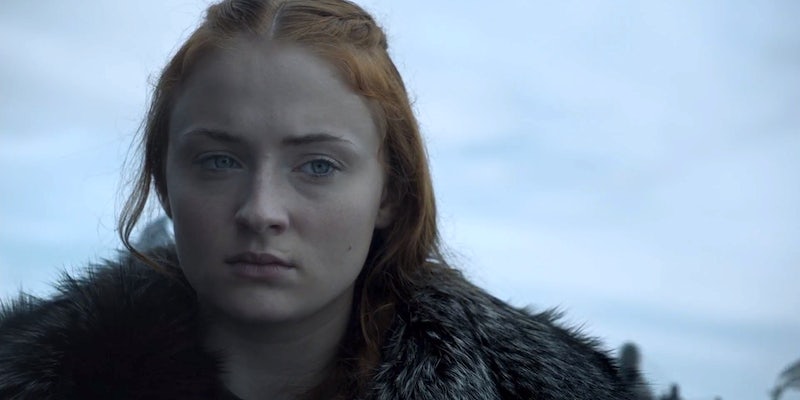 There's more at play than Winterfell and Meereen.

Warning: This post contains spoilers for the most recent Game of Thrones episode, “Battle of the Bastards.”

The dust is settling after the Battle of the Bastards, but the big fight is far from over on Game of Thrones.

The matchup between Jon Snow and Ramsay Bolton (and their respective armies) took up the majority of the episode, but “Battle of the Bastards” also showed the Siege of Meereen and the alliance between Daenerys Targaryen and Yara Greyjoy. In both cases, the characters we’ve followed for years were victorious: Dany “Dracarys’d” the slavers and the Sons of the Harpy out of Meereen while the Starks took back Winterfell with some help from Littlefinger and the knights of the Vale. Were the stakes not as high as in past battles? Possibly, but we finally got Ramsay’s death—albeit after Rickon Stark’s demise.

But Winterfell and Meereen are far from the only battlegrounds in Westeros and Essos. The preview for the season finale, “The Winds of Winter,” aptly reminds us of all that we still have to cover in that final, ominously titled episode, which clocks in as the longest to date at 69 minutes.

The synopsis, courtesy of an Emmy ballot, is vague even for Game of Thrones: “Season Finale. Cersei faces her trial.” But as the episode shows, that’s only scratching the surface of what we might expect in the wars to come.

Some things, like the possibility of Olenna Tyrell in Dorne, may offer more questions than answers. And some plots we might not pick up until season 7. The rest? It’s up to the gods.

Will there be justice in Winterfell? 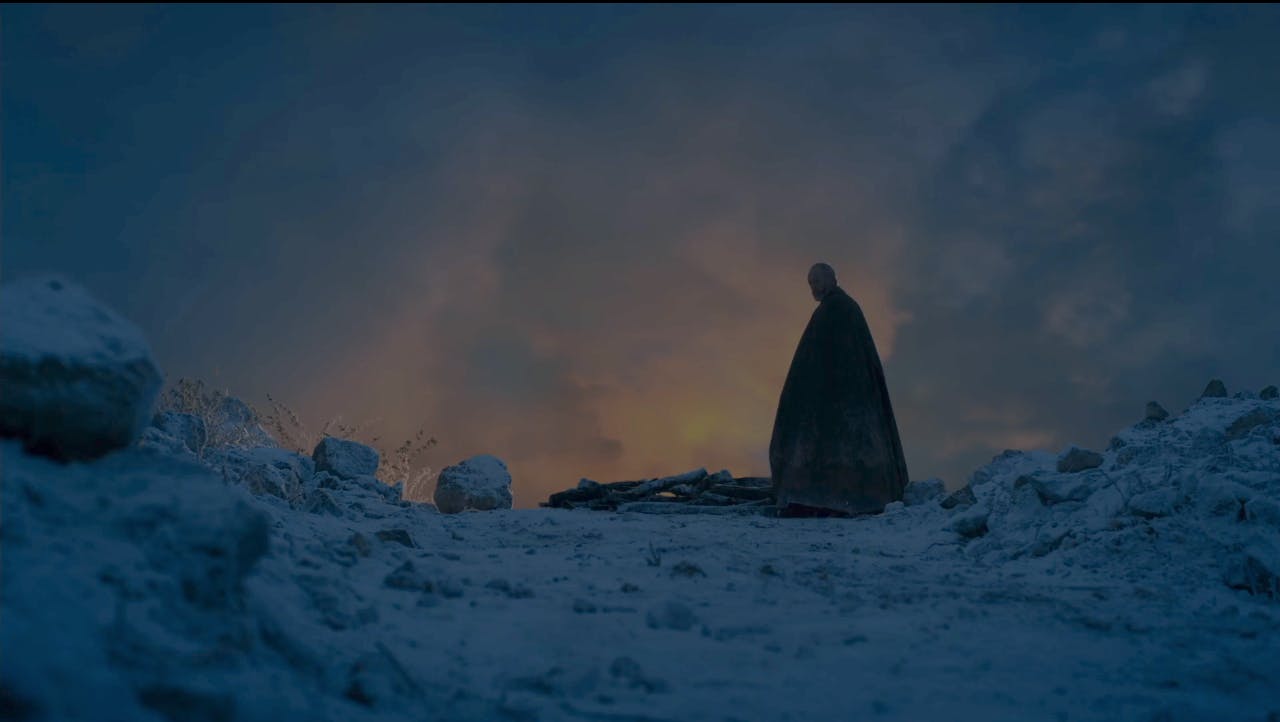 Sure, Jon and Sansa may have won Winterfell back from the clutches of the Boltons, but as anyone who’s watched Game of Thrones knows, that’s only the beginning. Even if you exclude the eventual confrontation with the White Walkers, you have a very pissed right-hand man on your side.

Davos Seaworth may have been instrumental in convincing Melisandre to resurrect Jon, but any warm feelings he may have had for the red priestess (who he’s long distrusted) were gone once he found Shireen Baratheon’s damaged wooden stag in what was left of her pyre.

“Tell him what you did to her,” Davos shouts in the trailer. “Tell him!”

That’ll probably put Jon in a tough spot. Davos has served him well, but he literally owes his life to Melisandre (and the Lord of Light).

And Davos’s rage isn’t the only thing to worry about. Sansa will find out just what asking Littlefinger for aid will cost her, although as Shae pointed out to her years ago, “Men only want one thing from a pretty girl.”

Cersei finally gets her trial 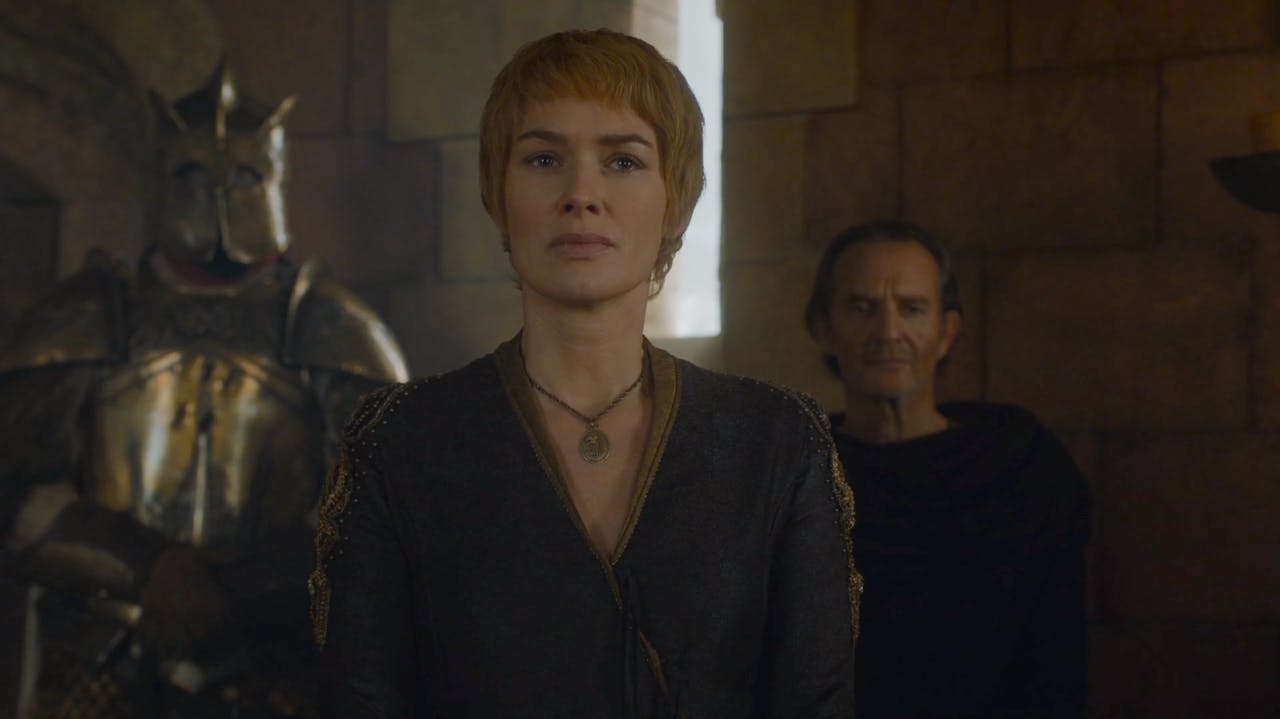 We’ve been hearing about Cersei Lannister’s upcoming trial all season after her walk of atonement in the episode “Mother’s Mercy” last season, and now we’re finally going to see it, albeit minus one Cleganebowl. King Tommen Baratheon saw to that himself when he outlawed trials by combat—Cersei’s rather obvious trump card.

So now she’s going to be tried by the Faith, and the trial begins as normal, at least at first. But after Qyburn confirmed the “rumors” his little birds checked out and Tyrion’s casual mention of wildfire, we have a feeling that this trial just might end up in flames.

And if Cersei does unleash wildfire on King’s Landing like Mad King Aerys never got to, just how many people will she take down with her?

Is this the episode that Daenerys finally leaves Meereen? 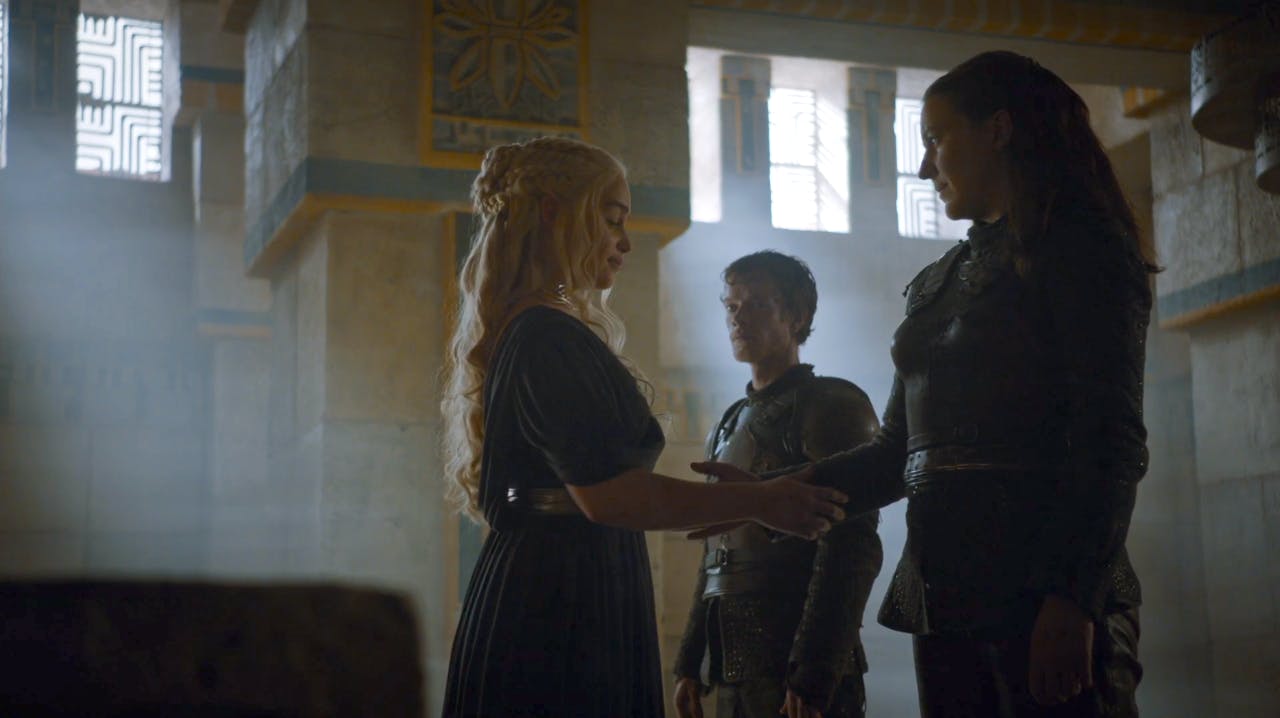 Dany has a lot on her side. Tyrion Lannister is her trusted advisor. She still has a portion of her Unsullied soldiers from season 4. She has the loyalty of the Dothraki riders. She’s got all three dragons. She even forged an alliance with Yara Greyjoy to take the Iron Islands from Euron Greyjoy for their support in the wars to come. So what’s holding her up from heading west?

Right now, we’re not sure, but chances are with so many other chess pieces to move in this episode, we may not see her departure until season 7.

Could Bran’s flashes reveal what we’ve been waiting for?

We only see a flash of Bran in the preview (and he’s been completely missing since adding Benjen Stark to his party), but he could still unlock the mystery we’ve been waiting for.

An interview with Rob Aramayo, who played the younger Ned Stark in the Tower of Joy flashback earlier this season, revealed that the actor “will appear again briefly in episode six before another significant showing in episode ten.” We saw the brief flash in Bran’s visions, but many believe that we’ll finally see what happened once Ned entered the Tower of Joy. Discovering just why a scream came from the Tower, would be big. Confirming R+L=J would be even bigger.