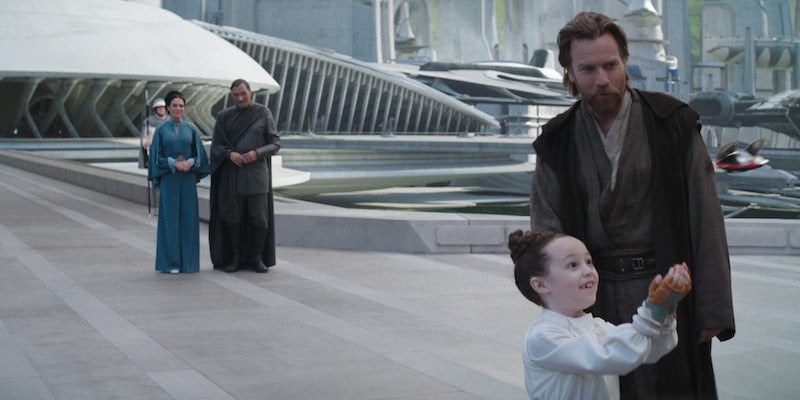 'Obi-Wan Kenobi' and 'The Mandalorian' rely on this innovative replacement for greenscreen—but it has some obvious downsides.

Industrial Light and Magic’s special effects are the backbone of the Star Wars franchise, creating rich visual worldbuilding that continually outshines other Hollywood franchises. But in the recent Disney+ spinoffs, a problem is brewing, dragging Star Wars closer to the murky, lifeless aesthetic we see elsewhere.

“The Volume” is ILM’s innovative replacement for greenscreen, employed throughout The Mandalorian, The Book of Boba Fett, and Obi-Wan Kenobi. It uses a massive, curved LED screen to create photorealistic backdrops, circumventing the need for outdoor locations or extensive physical sets. As the camera moves within the Volume, the perspective and light sources shift to encourage the sensation of exploring a real environment. (From a cynical perspective, it may also cut down on labor costs, as CG animators are less likely to be unionized than traditional set-dressers, model makers, etc.)

Actors and directors understandably prefer the Volume over greenscreen, describing it as impressively immersive and (from a practical perspective) a huge time-saver when envisioning what a scene will look like. The resulting visual product, however, is a mixed blessing.

Similar to the classic technique of matte-painted backdrops, the Volume splits a soundstage into two parts: A central area where actors can interact with props and physical sets like the Mandalorian’s spaceship, and a two-dimensional image creating an illusion of depth in the background. Sometimes it’s very effective, but the Volume has also caused some recurring visual issues in the new Disney+ shows—most obviously with lighting, and the way characters exist within their environment.

The Volume inevitably encourages a certain kind of scene: A cluster of people in front of either a wide-open space or a setting that doesn’t involve much physical exploration of the landscape. For instance, Obi-Wan crossing a wide street with a cityscape in the background.

The lighting for the foreground actors is often flat and muted, echoing the much-criticized palette of the MCU. While the filmmakers focus on the impressive abilities of the Volume, less attention is seemingly paid to old-fashioned lighting and camera techniques.

The Obi-Wan Kenobi finale included a textbook example, with Darth Vader and Obi-Wan dueling across a gloomy, contrast-free landscape where certain shots were basically just dark gray soup. Vader and Obi-Wan’s lightsabers were the main sources of light—a cool thematic detail that suffered from the same pitfalls as Marvel’s single-color lighting: It was often too dark to actually see what was going on.

This isn’t an issue we come across in other projects by cinematographer Chung-hoon Chung, a frequent Park Chan-wook collaborator (Oldboy; The Handmaiden) who produces stunning, textured imagery in more-traditional environments.

Watching this featurette, you have to be impressed by the sheer complexity of what ILM has achieved with the Volume. But at the moment, this technology feels like it’s in its larval stages—kind of like when Goerge Lucas was still figuring out how to use CGI during the Prequel Trilogy. And like the prequels, it would benefit from more overlap between new and old technology.

Many of the resulting scenes invite exactly the same criticism we see aimed at subpar blockbuster lighting and VFX. And while the Volume is a gamechanger, these shows aren’t currently using it in a very interesting way. The Mandalorian and Obi-Wan Kenobi rarely achieve the kind of imaginative visual worldbuilding we see in the movies. Most of their locations are either recycled (Tatooine) or involve conservatively generic sci-fi backdrops, hinting that the creators are more excited about the technology itself than expanding the vibrant, quirky nature of the Star Wars universe.

So far, the audience has responded accordingly. Unlike the obvious visual impact of Naboo, Crait, or Mustafar, I’m yet to see anyone express much interest in the new locations created for these shows. Meanwhile, the entire internet is head-over-heels in love with Baby Yoda, an old-school animatronic puppet.