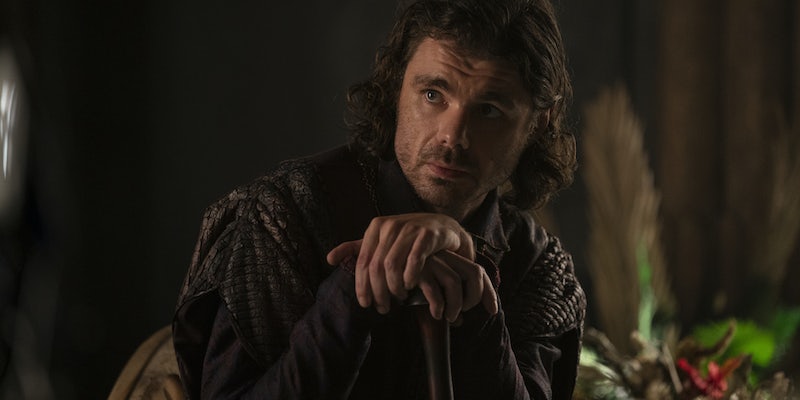 What’s the deal behind the ‘cursed’ reputation of Harrenhal on ‘House of the Dragon’?

A bleak enough reputation to cover up a murder or two.

Warning: This article contains spoilers for House of the Dragon episode 6.

The very first scene of House of the Dragon takes place at Harrenhal, a castle that is in much better condition than when we see it in Game of Thrones. Like many things in Westeros, Harrenhal’s reputation far precedes it. In the latest episode, we see how that history was manipulated to cover up even bigger crimes.

Episode 6 ends in flames. Not, as was the case in much of HOTD, from dragons, but from another source: A calvary of the worst men in Westeros—murderers and traitors among them—given clemency by Larys Strong (Matthew Needham) sets the castle ablaze, trapping Lyonel Strong (Gavin Spokes) and his eldest son Harwin (Ryan Corr) inside.

It’s Westeros’ version of the perfect crime. The men, who all had their tongues cut out in exchange for being saved from the gallows, cannot speak about their crimes. That allows the question of how Harrenhal caught fire to remain a mystery, one which remained unsolved when chronicled in Fire & Blood. And Larys uses it to his advantage to cover up the kinslaying he—by extension of his minions—just committed and gives a horrified Alicent Hightower (Olivia Cooke) the ability to bring her father Otto (Rhys Ifans) back to King’s Landing. Naturally, he expects an eventual reward for this gift.

“You’ve heard the stories of Harrenhal, Your Grace,” Larys explained. “It was built in hubris by Harren the Black, someone who was into his own greatness. Blood mixed into the mortar. It is said to be a cursed place, that it passes judgment on all who pass beneath its gates.”

Westerosi history proves Larys right, and many suspects are put forward in Fire & Blood. One is Corlys Velaryon (as a way to enact revenge on Harwin for making a mockery of Laenor (John Macmillan) through Rhaenyra’s (Emma D’Arcy) sons. Another is Daemon Targaryen (Matt Smith), who apparently wanted to take out someone vying for Rhaenyra’s attention. Larys is named as a suspect because his father and brother’s deaths mean that he now gets Harrenhal. Even Viserys (Paddy Considine) is suspected at one point; he’d have more motivation than anyone to take out Harwin to shut down the rumors about the father of his grandsons. (If nobody recalls what Harwin looks like, they can’t say the Velaryon boys look like him, can they?)

The largest castle in the Seven Kingdoms isn’t the Red Keep, Winterfell, or Dragonstone. It’s Harrenhal, which Harren the Black (of House Hoare), a king who ruled over the Riverlands and the Iron Islands, had ordered to be built. It took nearly 40 years to complete, depleted the financial resources of Harren’s citizens, and resulted in the death of thousands of men who worked on it.

Harrenhal was supposedly impregnable, and it was to the castle that Harren the Black fled after losing a battle against Aegon the Conquerer and his forces. Many of the families in the Riverlands, who had been invaded by Harren’s forebears, had little love for Harren and abandoned him for Aegon.

According to Fire & Blood, Aegon offered Harren mercy: If he bent the knee and pledged himself to Aegon’s cause, Harren would be allowed to rule over the Iron Islands and his sons after him. Harren elected to stay in his castle and wait it out, telling Aegon that “those walls are strong and thick” and that “stone does not burn” when reminded of Aegon’s dragon Balerion. In response, Aegon pledged to end Harren’s line that very night, which he did when he flew into Harrenhal and used his dragon to burn the castle (at least the non-stone parts of it) and everyone in it. As promised, Harren the Black’s line was completely wiped out.

From there, essentially every family in the Riverlands who hadn’t already pledged themselves to Aegon did just that.

Why does Harrenhal have the reputation it does?

Since Harren’s death, several families have, at one point or time, held the castle. But at this point in its history, every house that held Harrenhal would eventually become extinct, although their ends might not have been as dramatic as what happened to Lyonel and Harwin. (Nor did they all necessarily die at Harrenhal.)

After Harren the Black’s death, Aegon gave the castle to a member of House Qoherys, but House Qoherys was ended in a rebellion led by an alleged grandson of Harren the Black. House Harroway got it next, but that house found its end at the hands of King Maegor the Cruel. From there, Harrenhal was awarded to House Towers after its head won a melee. It passed down from father to son until that line died out, too; the last Towers lord was sickly.

As Fire & Blood puts it in the wake of House Harroway’s extinction, “men began to say that Harrenhal was cursed, for every lordly house to hold it had come to a bad and bloody end.”

The only person not to have been subjected to the “curse”? Rhaena Targaryen (a different one than the young girl we meet in this episode), the eldest sister of King Jaehaerys I Targaryen. She moved into Harrenhal after the death of her daughter Aerea and befriended the lord of the castle (Maegor Towers) and kept him company until his death. She stayed there until her death, and while her direct line may have ended—one daughter predeceased her, the other was a septa in Oldtown—her death did not mark the end of House Targaryen. From there, House Strong took over the castle, which it’s held for the better part of 50 years; with Lyonel and Harwin’s deaths, Harrenhal now goes to Larys.

By the time we get to A Song of Ice and Fire, it’s changed hands several more times; most recently, Littlefinger holds it but he’s yet to occupy it himself.

Why would Larys want to kill his father and brother?

Our introduction to Larys Strong comes in episode 3, “Second of His Name,” when he sits with the young Queen Alicent and the ladies instead of joining the royal hunt. Larys can’t participate in the hunt due to being born with a curved foot (he’s also known as “Larys Clubfoot”), so he mostly just sits and listens to the gossiping ladies. By episode 5, he’s attempting to place himself in a position where Alicent can rely on him by revealing to her that the Grand Maester had prepared moon tea for Rhaenyra on Viserys’ orders. This plants the seed of doubt in Alicent’s mind about whether Rhaenyra told the truth about whether she had ruined herself.

Ten years later, Alicent and Larys still meet, the latter almost acting like her own master of whispers, and from the looks of it, their dinners are frequent. And on this particular night, their problems are laid bare: Lyonel, a man who once advised Viserys that Rhaenyra should wed Laenor Velaryon over his own son (Harwin, coincidentally), was now compromised. Lyonel tried to resign as Hand: He no longer felt he could do the job because he was compromised. But Viserys wouldn’t let him resign until Lyonel told him why he was compromised. Which Lyonel refused to do because naming it would mean certain death for Harwin (and possibly three young boys) and force Viserys’ hand to acknowledge the one thing that everyone could see but for him.

And for Larys, his father choosing his family over the realm is unacceptable.

“What are children but a weakness?” Larys says. “A folly. A futility. Through them, you imagine you cheat the great darkness of its victory. You persist forever in form or another as if they would keep you from the dust. But for them, you surrender what you should not. You may know what is the right thing to be done, but love stays the hand.”

And while Alicent’s wish to bring Otto back into the fray would be the exact opposite of unbiased, he’d at least be partial to her in an environment where everyone seems to be against her.

The worst-kept paternity secret in Westeros

In the time since their marriage, Rhaenyra and Laenor have had three sons: Jacaerys, Lucerys, and Joffrey. At least, that’s the official story and the one that Viserys will not have anyone in the Seven Kingdoms—even his own wife—question.

The actual story is that Laenor didn’t play a part in any of it. All of Rhaenyra’s sons were fathered by Harwin Strong, the Commander of the City Watch, and the reason everyone can tell is that they have none of the Velaryon boys have the silver-blond hair that most of House Velaryon and Targaryen have. That silver-blond hair alone isn’t enough to rule out paternity—a few Targaryens were born without it such as Corlys’s wife Rhaenys in Fire & Blood (because of her Baratheon heritage; she’s blonde on the show), Rhaegar’s daughter Rhaenys, and Jon Snow—but those boys all really take after Harwin; in Fire & Blood, they all have the same brown eyes, brown hair, and pug nose as Harwin.

The scene with Rhaenyra, Laenor, and Harwin all in the same room with their kids is brief, but there doesn’t seem to be any animosity between any of them. Rhaenyra and Laenor’s open marriage of convenience has held so far, and if Laenor can both live how he wants to and have kids without having to do anything to make that happen, who’s to complain? It’s super dangerous, but for now, they’ve got Viserys’ protection.

Rhaenyra refuses to confirm it even when Jacaerys asks his mother point-blank if Harwin is his father, telling him that “You are a Targaryen, that’s what matters.” But everyone else knows it. It’s why Alicent wants to see baby Joffrey as soon as he’s born and she tells Laenor to keep trying because “sooner or later, you may get one who looks like you.” Alicent later vents to Criston Cole (Fabien Frankel) about it because Viserys refused to do anything about it. Criston then taunted Harwin for how invested he was in Jacaerys and Lucerys’ swordsmanship and how familial ties would be the only reason to do so, which leads Harwin to beat the crap out of Criston—and Lyonel to rip Harwin a new one for allowing himself to be provoked like that.

By the time news of Joffrey’s birth arrives in Pentos, it’s basically a punchline to Daemon, who asks his wife Laena Velaryon (Nanna Blondell) if “your brother mentions if this one also bears a marked but entirely coincidental resemblance to the Commander of the City Watch.”

And while Harwin and Lyonel might be out of the picture, it’s probably far from the last time the matter of the secret that killed them will cause issues, no matter how much Viserys would prefer to keep everything buried.