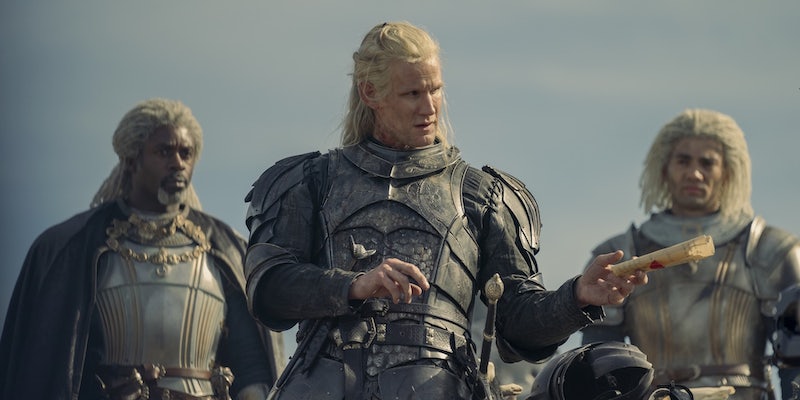 The War in the Stepstones leads to the arrival.

Warning: This article contains spoilers for House of the Dragon episode 3.

We always knew that House of the Dragon would have many more dragons—17 of them, in fact—in the series than its predecessor ever could. And while the series premiere delivered with the introduction of the show’s first two dragons, it took a little longer for our first look at another one.

Much of episode 3 is focused on the celebration around Prince Aegon Targaryen’s 2nd name day. Instead of being allowed just to enjoy his son’s birthday, King Viserys (Paddy Considine) is facing two political quandaries as he’s being pressured to make Aegon his heir—because, with a son, the realm can return to tradition and precedent of only male heirs—and to find a suitable husband for his daughter Rhaenyra (Milly Alcock), who has no interest in getting married. But the bigger setpiece of the episode involves Corlys Velaryon (Steve Toussaint) and Daemon Targaryen’s (Matt Smith) war in the Stepstones, the stretch of islands controlled by Craghas Crabfeeder.

What is a stalemate for much of the episode finally comes to a head as Daemon walks alone onto the battlefield, seemingly to give himself up or embark on a suicide mission before he singlehandedly takes down much of the Crabfeeder’s forces. When it seems like his cause is lost, the rest of his forces arrive with a dragonrider in the sky. But Daemon didn’t suddenly hop on Caraxes’ back: It’s Corlys’ son Laenor (Theo Nate) on a different dragon named Seasmoke.

How can Laenor ride a dragon?

Like most things on House of the Dragon regarding inheritance or what a character can and cannot do, it really comes down to Targaryen ancestry. While House Velaryon is a household whose origins go back to Old Valyria, Corlys himself admitted that being a Velaryon didn’t automatically signify being able to ride a dragon.

Laenor’s ability comes from the other side of the family. His mother Rhaenys (Eve Best) is a Targaryen through her father (King Jaehaerys’ eldest son), but her mother’s side of the family has hints of Targaryen ancestry through House Baratheon, which was founded by a rumored bastard brother of Aegon the Conquerer.

How does a dragonrider bond with a dragon?

“We shall not pretend to any understanding of the bond between dragon and dragonrider; wiser heads have pondered that mystery for centuries,” Archmaester Gyldayn, the in-universe author of Fire & Blood, wrote about an incident that occurred during the Dance of the Dragons. “We do know, however, that dragons are not horses, to be ridden by any man who throws a saddle on their back.”

So far, House of the Dragon isn’t unveiling the mystery of exactly how a dragon bond works. We know, per tradition, that when a Targaryen baby is born, a dragon egg is placed in the baby’s cradle to allow the two to bond. We already saw that with Rhaenyra picking out an egg to place in the cradle of her baby brother Baelon, which Daemon later stole for the baby he lied about Mysaria (Sonoya Mizuno) carrying. Presumably, the same was done for baby Aegon.

But not every dragon egg placed in Targaryen cradles hatch, so Targaryens are also given the chance to bond with living dragons, which often outlive their first owner. There are a couple of instances of that in the show already (more below), and more will follow as the story progresses. Other times, a dragon dies, allowing a dragonrider the ability to eventually bond with another unclaimed dragon.

Once the bond is set in stone, almost nothing will break it short of death.

Other confirmed dragons with dragonriders

With Laenor and Seasmoke introduced into the fold, we now have three dragonriders; Rhaenyra and Daemon are the other two.

Rhaenyra’s bond with her yellow dragon Syrax is pretty strong when we meet them. Rhaenyra has command of the sky while Syrax carried out Rhaenyra’s order of “Dracarys” during Aemma’s funeral. And when it came to confronting Daemon, she warned the men on Dragonstone’s bridge to take care.

“Take care not to startle Syrax, my lords,” she says after arriving in Dragonstone. “She’s rather protective of me.”

The connection between Daemon and Caraxes, a long and skinny red dragon who’s also known as the “Blood Wyrm,” is also strong. But Daemon wasn’t his first rider: That distinction goes to Aemon Targaryen, Rhaenys’ father.

Laenor isn’t the only member of his immediate family to be a dragonrider. Rhaenys is one too. We haven’t met her dragon Meleys (who is red and pink in color) yet, but that particular dragon has a storied past as well. Her previous rider, Alyssa Targaryen, is Viserys and Daemon’s mother, and according to Fire & Blood, Alyssa took both of her sons to the sky within two weeks of their respective births.

Known dragonriders who no longer have a dragon

Viserys, on the other hand, only claimed one dragon. He bonded with Balerion the Black Dread, the dragon that Aegon the Conquerer flew when he conquered Westeros—and the only dragon alive who had seen Valyria before the Doom. Balerion, who lived to be around 200 years old before dying of old age (a rarity among the Targaryen dragons), had the most riders: Aegon, King Maegor I Targaryen, Aerea Targaryen (a rebellious princess who disappeared for a few years with the dragon before returning home in an ill state), and finally Viserys.

By the time Viserys made Rhaenyra his heir, he almost seemed to want nothing to do with dragons if he could help it, and he tells young Laena Velaryon (Nova Fouiellis-Mosé) that Vhagar, the dragon bonded to Aegon’s sister-wife Visenya, is, according to some, “too large for this world.”

“The idea that we control the dragons is an illusion,” Viserys explained. “There are powers men should have never trifled with. One that brought Valyria its doom. If we don’t mind our own histories, it could do the same to us. A Targaryen must understand this to be king—or queen.

While many more dragons will eventually be claimed—some by Targaryens who aren’t alive yet—we only know of two dragons who currently don’t have a rider; for some characters, that may yet change. Dreamfyre is briefly mentioned as the dragon who laid the egg Rhaenyra meant. Her original rider, Rhaena Targaryen ( Aerea’s mother and the daughter of King Aenys I Targaryen and Alyssa Velaryon), died decades before.

The other dragon, Vhagar, has even more of a storied past. Originally the dragon rode by Aegon’s sister-wife Visenya as they conquered Westeros, Vhagar’s second (and so far only) rider was Viserys and Daemon’s father Baelon. In episode 2, Vhagar is the dragon that piqued Laena’s curiosity as she asks Viserys questions about where she might be located since she’s too big to reside in King’s Landing’s dragonpit; Viserys believes she lives on the coast of the Narrow Sea.

“The workers at Spicetown report hearing her song at times,” Laena says. “They say it is a sad song.”

And while we don’t know yet if Laena has command of Vhagar or any dragon, it’s a little more than apparent which one she wants. If you’re gonna claim a dragon, you might as well aim for the skies.