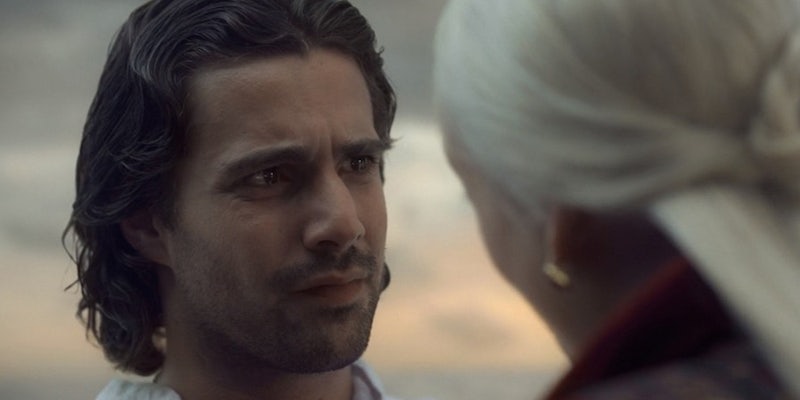 Rejection was only the beginning.

Warning: This article contains spoilers for House of the Dragon episode 5, “We Light the Way.“

Even by Westerosi standards, Ser Criston Cole on House of the Dragon is really going through it. But whether you empathize with some of his actions, see him as an irredeemable villain, or fall somewhere in-between, the result remains the same: Criston Cole, once (and, for many, still) the dreamboat of the series, is now the next great meme target.

In just one episode, the princess Criston Cole had been sleeping with rejects his suggestion to run away to Essos—and for her to abandon the Iron Throne—to redeem his honor, he immediately blabs about their relationship to her overly religious stepmother, becomes the most obvious brooding ex at the opening feast to her wedding, and commits a hate crime against his ex’s fiancé’s lover who figured it all out. He almost ends his own life in shame for what he’s done and who he’s become, but it’s Queen Alicent Hightower who saves him in the end. (And, given the glimpse of HOTD’s time jump so far, it looks like Criston Cole will stay by Alicent’s side.)

But it also means, when HOTD fans are taking swings at the character to make fun of him, they’re not about to hold back because there are just so, so many ways to take him down.

For example, his plan to run away to Essos with Rhaenyra, marry her, and become a sellsword? It probably could’ve used a bit more work! Also, traveling with Syrax—because there’s no way Rhaenyra would’ve left her dragon behind—would’ve been a logistical nightmare for staying out of sight. But the consensus is that he does not handle it well.

Nor was his immediate reaction to admit to Alicent—Rhaenyra’s stepmother and now her biggest rival—to crimes he wasn’t even being accused of committing.

Rhaenyra’s proposal—keeping things the way they were thanks to she and Laenor’s agreement on an open marriage—wasn’t something that Criston was down for. “So you want me to be your whore?” he asks. Well, as Twitter pointed out, at least one person might’ve said yes to being her paramour. That’s Harwin Strong of the City Watch, the son of Viserys’ Hand who fans might recognize as both the only person not horrified at seeing Rhaenyra covered in blood after killing a boar a couple of weeks back and who carried the princess over his shoulder to protect her when Criston killed Ser Joffrey Lonmouth.

And while, like most Westerosi weddings, Rhaenrya’s wedding to Laenor was marred in tragedy, it was the prime event to measure all of the people in her life up.

HOTD is about to make a major time jump as it swaps out several of the actors for older counterparts. But the level of mess Criston Cole brought to just one episode is sure to leave the kind of ramifications that last well beyond one fateful and chaotic night.