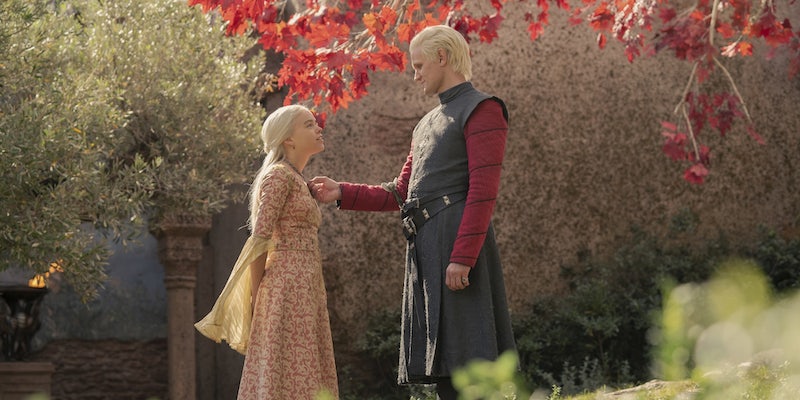 The Daemon-Rhaenyra scandal plays out differently in the show than it did in the book.

Warning: This article contains spoilers for House of the Dragon episode 4.

The fictional history at the center of House of the Dragon, as told in George R.R. Martin’s Fire & Blood, is often convoluted and messy. It contracts itself, relies on rumors, biased voices, and sometimes unsavory characters with agendas to tell (but who may be the only eyewitness to some events). And while we’re still a ways off from seeing just how the show plans to tell “the objective truth” about what happened in the Targaryen civil war to come, House of the Dragon is applying that lens to an aspect of the story that puts the double-standards of Westeros’ patriarchal society on full display.

Episode 4 picks up where we left off, with Rhaenyra Targaryen (Milly Alcock) being given the chance to choose which lord of Westeros she will marry. By the end of the episode, Viserys (Paddy Considine) makes that decision for her—and lands on Laenor Velaryon (Theo Nate), which master of laws Lyonel Strong (Gavin Spokes) suggested in episode 3—after reports reach Viserys’ ears that Rhaenyra was spotted in a pleasure house on the Street of Silk with her uncle Daemon (Matt Smith).

It didn’t matter what may or may not have happened (and Rhaenyra denied that anything had happened), but by Westerosi standards, Rhaenyra was compromised and needed to marry someone fast before rumors of what may have happened spread to the other lords, even if any reported trysts didn’t result in a pregnancy.

When verbally tearing her down, Viserys once again references the prophecy he told her several years (and episodes) prior, showing her the words written on his catspaw dagger. He also alludes that his decree that she marry Laenor is a much more lenient sentence than the previous king, who more or less disowned one of his daughters caught in a similar scandal, would’ve handed out.

Viserys’ attitude leans into the kind of hypocrisy that Rhaenrya pointed out earlier in the episode as she scoffs at Daemon’s description of marriage as “only a political arrangement” and that she could “do as you like” once wed. Even as Rhaenyra argued with her father, she called out the unfairness of the situation and that if she were born a man, she could father a dozen bastards without consequence. Because she’s a woman, even a fraction of pleasure means she’s ruined—and Viserys is using the opportunity to remedy the political headache he caused when he chose Alicent (Emily Carey) over Laena Velaryon.

Essentially, three different stories emerged in Fire & Blood. The first one, from Grand Maester Runciter, only notes that at some point, Viserys and Daemon got into an argument. Runciter didn’t mention what they fought over, only that Daemon was exiled out of King’s Landing, which one could certainly argue was done to either make Viserys look good or protect the royal family. The other two conflicting stories in Fire & Blood, told by characters who have yet to appear in HOTD, involve varying degrees of scandal, salacious detail, and probably a good measure of misogyny.

Septon Eustace (whose writing was often deemed to be biased against Rhaenyra) purported that Daemon took Rhaenyra’s virginity and that the two were discovered by a member of the Kingsguard. Rhaenyra, who saw herself in love with Daemon, wished to marry him, but Viserys refused on account of Daemon already being married to Rhea Royce, the woman that Daemon not-so-fondly calls the “Bronze Bitch.” Viserys then swore Daemon to secrecy.

The other story comes from Mushroom the court fool who often went unnoticed in the room (and whose writing was more sympathetic toward Rhaenyra but is also often lewder and can sometimes read like self-insert fanfic). He claims that Daemon disguised Rhaenyra as a page boy to take her to brothels, trained her in the art of seduction, and taught her how to please a man; Mushroom alleges he was sometimes part of these lessons. However, Rhaenyra didn’t sleep with Daemon. Her goal was to seduce Ser Criston Cole (Fabien Frankel), who turned her down, and word eventually got to Viserys, who had the story confirmed by Daemon. Daemon then offered to wed Rhaenyra—“Who else would take her now?” Daemon reportedly said—which led to Daemon’s exile.

So who was right?

Sometimes, multiple versions of the same story have one that’s clearly right and others that are nonsense. Other times, each version has a nugget of truth contained within. In this case, when it comes to talking of Daemon’s exit from court and virtues, the latter is true.

As we saw play out in episode 4, Daemon seduced Rhaenyra and Rhaenyra seduced Criston Cole. When Viserys found out about it, he argued with Daemon, and he kicked his brother out of King’s Landing. After Rhaenyra agrees to wed Laenor, she is provided moon tea, which women can drink to either prevent or end pregnancies, by the grand maester on Viserys’ orders.

The complications that HOTD can explore, offer more detail and nuance than several salacious and potentially libelous accounts could offer, and not even those stories got everything right.

In Fire & Blood, Criston Cole turned Rhaenyra down in Mushroom’s version of events because as a member of the Kingsguard, he had sworn a vow of celibacy and never to take a wife or have children. But in House of the Dragon, he gives in, although he appears to be much more hesitant about it (not to mention the unspoken position of power Rhaenyra holds over him) until the white cloak symbolizing his vows to the realm is removed.

The Daemon of it all

The other lingering question, and one that might not have such an easy answer, is the Daemon factor. Regardless of how events played out—and Daemon also points out Westeros’ hypocrisy—Daemon offers to marry Rhaenyra himself. “I’ll take her as she is and wed her in the tradition of our house,” he assures Viserys. Daemon seems not to be bothered by the whole Targaryen incest thing, nor is he bothered by taking a second wife; like with Mysaria (Sonoya Mizuno), Aegon the Conqueror set a precedent for polygamy.

But Viserys isn’t buying it. It isn’t immediately clear if Daemon’s feelings for Rhaenyra are sincere, but even if they are, Viserys sees right through Daemon’s scheming toward an even loftier goal.

“It’s not my daughter you lust for, is it?” Viserys says. “It’s my throne. Go back to the Vale, Daemon, to your lawful wife. Strive to restore whatever scrap of honor remains in you. Or don’t, it matters not to me. As long as you are gone from my sight for good.”

A hungover Daemon may have been kicked to the curb, but Rhaenyra got the final word. Sure, she may have agreed to marry Laenor, a character who seems decent by HOTD standards (a very low bar) but is probably not the man she wanted to marry. But she used her leverage to get Viserys to remove Otto Hightower (Rhys Ifans), one of the most influential men in Westeros, from a position of power where he could convince Viserys to place Rhaenyra’s half-brother Aegon on the throne instead of her. For Rhaenyra, it’s the kind of victory that Martin excels at: a bittersweet one.