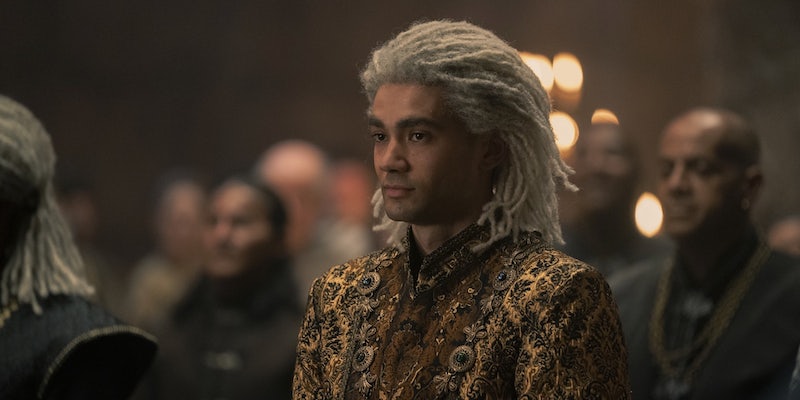 Warning: This article contains spoilers for House of the Dragon episode 5.

House of the Dragon threw its first on-screen royal wedding of the series in episode 5 between Rhaenyra Targaryen and Laenor Velaryon, but if you’re familiar with any of Game of Thrones, it’s always the kind of affair that gave people plenty to talk about. And between the parties involved and its bloody end, HOTD was no exception.

Keen to quiet a potential scandal and clean up a political mess of his own making, King Viserys (Paddy Considine) determined that Rhaenyra (Milly Alcock) would marry Ser Laenor Velaryon (Theo Nate) after she snuck out of the Red Keep with her uncle Daemon (Matt Smith), slept with Ser Criston Cole (Fabien Frankel) and lost her husband-choosing privileges as a result. But, as episode 5 demonstrated, even the king must grovel a bit as he and Rhaenyra traveled to Driftmark—the island that House Velaryon calls home—to proposition the marriage alliance to Corlys Velaryon (Steve Toussaint) and his wife Rhaenys (Eve Best).

There were some negotiations and concessions to be made; all Rhaenyra and Laenor’s children would bear the surname “Velaryon” until one of them ascended the Iron Throne when it would change to Targaryen. But as the parents discussed the finer details indoors, Rhaenyra and Laenor, who grew up together as cousins of a similar age, did some negotiating of their own.

The detail that made its way into Fire & Blood

While nobody actually says the word “gay” when speaking about Laenor’s sexuality, it’s apparent that everyone with an opinion on the matter or a say in who he marries—whether it be Rhaenyra, Laenor, or even Corlys—knows that Laenor is gay. As someone who, even if he wasn’t being bartered off to marry the heir to the Iron Throne and was just the heir to Driftmark, is expected to produce heirs, it becomes an issue.

In Fire & Blood, Archmaester Gyldayn (the in-universe author) touches upon the subject in abstract terms, making notes that Laenor “surrounded himself with handsome squires of his own age, and was said to prefer their company” over women. One of Viserys’ advisors, Gyldayn says, pushed back, and compared sexuality to one’s preference for fish: He’ll eat it if served even if he does not like how it tastes. Rhaenyra, on the other hand, suggested (per Gyldayn) that “My half-brothers would be more to his taste.”

On HOTD, the taste of food as a sexuality metaphor emerges in the conversation that Rhaenyra and Laenor have as they discuss their future regarding roast duck and goose. Except, where the book version frames the analogy as something to endure, Rhaenyra says that she’s unable to change what taste she prefers and suspects the same for Laenor.

“I know that whatever agreements are being struck up there will not change your appetites, nor will it change mine,” Rhaenyra says.

We only need to look toward Game of Thrones, which depicted a more fundamentalist version of the Seven’s attitude toward homosexuality in the Faith Militant’s treatment of Loras Tyrell, to get an indication of what might happen were Laenor’s sexuality were to become more widely known. (Corlys, it seems, tolerates it but insists that Laenor will “outgrow it.”) But Rhaenyra proposes something of an open marriage: They do their duty, and once they’re done, they can sleep with whomever they want to. Given what we’ve seen of Westerosi marriages so far—including the all-too-brief appearance of Rhea Royce (Rachel Redford)—it might be a best-case scenario for both of them.

Rhaenyra is likely thinking of Criston Cole, but he’s not interested in continuing to be her paramour (and she doesn’t want to abandon her throne to run away to the Free Cities with him). But Laenor has a paramour of his own with whom he keeps close.

Who is Ser Joffrey Lonmouth?

A Joffrey? In this economy? Even though Game of Thrones fans have a certain negative association with the name, it’s a name that got a lot of usage in various parts of Westeros and isn’t necessarily tied to one family (compared to the vast majority of Aegons in Westeros being Targaryens).

Joffrey Lonmouth (Solly McLeod) is practically the polar opposite of Game of Thrones’ future tyrant. He’s loyal and clever, but he’s also invested in protecting his own self-interest; much of his personality is centered around being Laenor’s lover. House Lonmouth hails from the Stormlands, which is overseen by the Baratheons, and they’ve mostly escaped the notice of House Targaryen’s history until now. Fire & Blood first describes Joffrey as Laenor’s favorite and noted that he had the nickname “Knight of Kisses.”

On the show, Laenor and Joffrey being lovers is a matter of text over subtext, and they even share a conversation where Joffrey is impressed about Rhaenyra’s being nonchalant about Laenor’s sexuality.

A different tragic end by the same hand

The leadup to Rhaenyra and Laenor’s wedding was set to be a lavish affair fitting for the Princess of Dragonstone and the heir to the Iron Throne. Instead, festivities were cut short by Joffrey Lonmouth’s death at the hands of Criston Cole and a rushed wedding followed while Lonmouth’s blood still pooled in the throne room.

So what happened? In both the book and show, Joffrey’s death occurs in the lead-up to Laenor’s wedding, but the circumstances differ. Fire & Blood says that Joffrey and Criston Cole faced off in a tourney to celebrate the wedding, but Criston had beaten Joffrey so badly that it took him six days to die and he never regained consciousness; it’s a blow that one could write off as an accident. But here, it’s more nefarious in nature: Joffrey had a bit of an epiphany and pushed his luck with cleverness. And he tried playing politics with a Kingsguard scorned and got burned in the process.

“Ser Laenor is quite dear to me, as I know the princess is to you,” Joffrey says to Criston. “We should swear to each other to guard them and their secrets. Because if those are kept safe, then so are we.”

Joffrey’s tone might be pleasant, but the threat is clear. Joffrey might wish to keep Criston’s secret regarding Rhaenyra for now, but who’s to say he might not blab in the future about how Criston broke his Kingsguard vows and slept with the princess? Even if Criston is conflicted after the fact, there’s a sense of self-preservation behind killing Joffrey, but there might also be a hint of getting some revenge on Rhaenyra: If she chose to marry Laenor and the throne over running away to Essos with him, then Criston will make the start of her marriage as miserable as possible and have her potentially start to regret that decision.