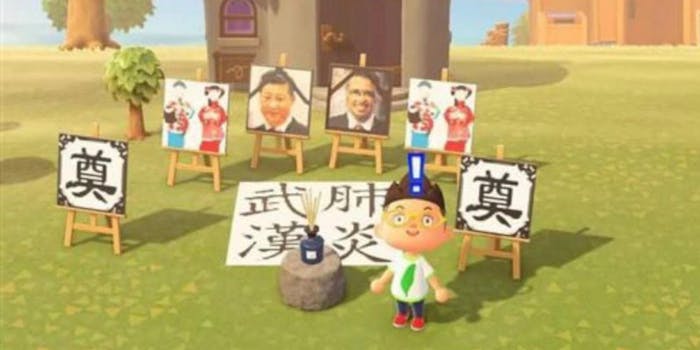 Instead of taking to the streets, Hong Kong protesters are organizing on ‘Animal Crossing’

The protesters are criticizing the Chinese government on the game.

The people of Hong Kong may not be able to demonstrate in the streets, but that’s not stopping them from protesting.

Animal Crossing: New Horizons was released on the Nintendo Switch last month, just as many across the globe settled in for isolation and quarantine amid the coronavirus. The social simulation game allows users to make paintings and textiles with custom images, which protesters have used to express themselves in intriguing ways.

In response, Animal Crossing has been pulled from the Chinese Nintendo e-Shop. Vice reports that the ban is unlikely to stifle the game’s popularity, as even the Shanghai Fire Department has used it to make in-game messages.

Screenshots from the game are being shared with increasing frequency as the Chinese government attempts to tamp down on insurgents on the platform. The images shared include characters speaking phrases such as “free Hong Kong” and banners with similar messages.

A video shows users beating an image of a Chinese official with butterfly nets.

It’s worth noting the game has been banned in mainland China as a result of these online protests in Hong Kong. By all accounts, those living in Hong Kong are still able to play. Sellers in Beijing, according to Vice, are being told by the regulatory authority to pull the game off shelves and from online listings. The Chinese national regulator didn’t approve the game, so there was never a point at which the game was officially available.

USgamer reports that Hong Kong players resorted to Animal Crossing as a method of protest after gatherings greater than four were banned in the wake of COVID-19.