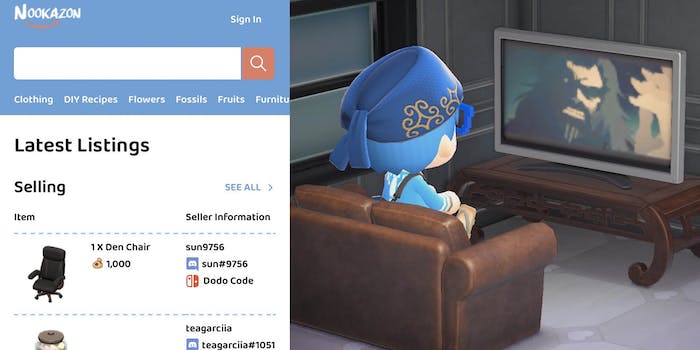 People are even putting their villagers up for sale.

There have been so many movies and books, where people live in a virtual simulation rather than whatever nightmare reality had morphed into in these fictional worlds. But none of these stories predicted the virtual world we have strangely dived into during this particular crisis—Animal Crossing: New Horizons.

The Nintendo Switch game has become a peaceful, low-conflict place for people to hang out with their friends, create islands, and collaborate to make new things. And because it has taken over our day-to-day lives in a way while going out into the real world is off the table, it’s no surprise that things from the game are mixing with reality, in a way.

Specifically, there’s an “Amazon for Animal Crossing” online, called Nookazon, where people sell items from the game in exchange for bells (Animal Crossing currency) or other specific items they need.

The operation isn’t officially connected to the game, or Nintendo, but is instead a fan-built site that operates on somewhat of an honor system using Discord chat and in-game communication.

Fans of the game are already obsessing over the site, both for all it has to offer and how wild it is that this is our world now.

“Soon we will transcend this plane and live permanently in animal crossing world,” joked one user.

In addition to trading actual items, people are also putting animal villagers up for sale, which just feels oh so wrong on a certain level.

“Human, err- ANIMAL trafficking needs to be stopped,” wrote @Red_EmW in response to a villager named Frita going up for sale.

But mostly, it looks like people are just having a good time furnishing up their Animal Crossing homes—which is kind of hilarious considering we are all stuck inside our actual homes as-is.

Still, it’s fun to check out the pictures, and players certainly enjoy sharing them.

In a time where most of us are pinching pennies and wondering when work and the economy will go back to normal, it’s nice to know that we can get our shopping fix in through a virtual world—a world that we may be living in for months at this rate. So we might as well make it cozy!