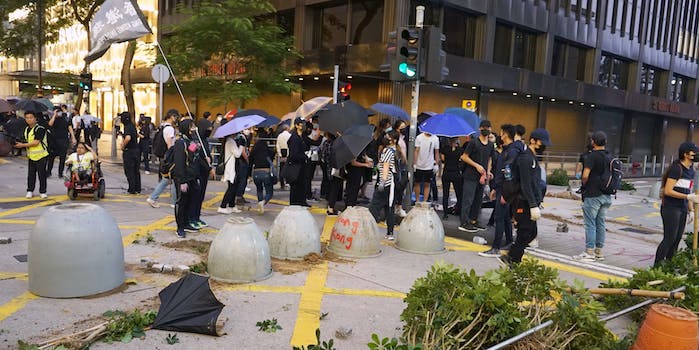 Hong Kong has been rocked by both protests and violent retaliation from police since June.

Starting in response to an extradition bill that would have allowed fugitives to be returned to mainland China, the protests expanded to address China’s increasing crackdown on the region’s autonomy.

Now, things have appeared to reach a tipping point.

Protesters have been occupying Hong Kong Polytechnic University for several days now. Under siege by the police, protesters have been fighting back with gasoline bombs and arrows. Last night, police gave them until 10:00pm to vacate the university, saying that after that they’d start firing live ammunition.

When students attempted to leave, they were met with rubber bullets and tear gas.

Thousands and hundreds of tear gas, rubber bullets,sponge bomb attacked poly through out the night, and this is what the Hong Kong police announced! #HongKongProstests pic.twitter.com/hTweR1K2rl

Hong Kongers went to social media pleading for help and trying to draw the world’s attention to what was happening.

#HongKongProtesters #HongKongProstests #PolyU
Please help the hongkonger and student inside polyU！
Many student was Injured and arrested inside poly u
Please help!!!!!!!!!
Please push!!!!!!!! pic.twitter.com/g26rnejRP8

Medical staff were detained when they left the university, while social workers who came en masse asking to be allowed in to help were reportedly kept out by the police.

Hundreds of registered social workers holding their pass outside #PolyUHK pledged the #HongKongPoliceTerrorists allowance to enter the uni with humanitarian aids, but #hongkongpolice has not yet permitted #hksoso #HongKongProstests pic.twitter.com/4aRVWf29HZ

Medical supports are being avoided in PolyU. Doctors, nurses and paramedics are caught hands tied on their back. #HongKongProstests pic.twitter.com/KQXvDgdPaB

Police were even caught on video saying that they wanted a reenactment of Tiananmen Square, the 1989 pro-democracy protests in Beijing, where protesters, mostly students, were massacred by the Chinese military.

People drew additional parallels to Tiananmen Square with the disproportionate violence meted out by police on unarmed and lightly armed protesters.

The standoff is continuing as of press time, with the students inside reporting that they have no food, no water, are about to lose power, and that the police won’t allow them to leave, still firing live rounds as well as rubber bullets and tear gas when people try.

Despite this, a hundred or so students have allegedly managed to escape by rappelling down off the highway.

Protesters in PolyU made dramatic escape as all possible way out will lead themselves to the police #HongKongProstests https://t.co/Pye7QnmdN8

Other Hong Kong citizens are currently advancing on the university and the police line in an attempt to support and rescue the people trapped inside.

People who trapped in #PolyU are watching live that filming the hk people outside are coming for them.

They too face opposition from the police and are on the receiving end of state violence, including water canons.

Here is Hong Kong Prudential Hotel in Nathan Road, TST. The riot Police attack people from two side with the water cannon vehicle. They are all come for rescuing students only!#HKPoliceTerrorism #HongKongProstests #soshongkong pic.twitter.com/xctpGipPOW

Meanwhile the students still inside have put out their last words on Twitter. In it, they state that while they expect to die at the hands of the state, they are calm because history will side with them.