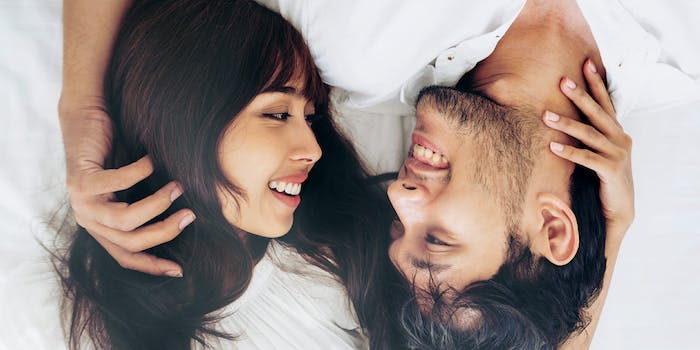 If every couple was this honest, Instagram would be way more fun.

Every couple, no matter how great they may seem from the outside, has issues they have to deal with in their relationship. People argue, they forget anniversaries, they keep secrets from each other. It doesn’t mean they aren’t in love; it just means they are human, and therefore not perfect.

Of course, you’d never figure that out by scrolling through Instagram, where it appears every couple is sickeningly happy and always on a beach. But one account on the platform is injecting a few dark clouds into the bright blue sky that is couple Instagram pictures. It’s called “Honest Couple,” and, despite being around less than a year, it’s already racked up nearly 37,000 followers, who can’t enough of the account’s dark humor.

Some of the posts are short and (not so) sweet.

She thinks I’m going to propose while we are here. She is woefully mistaken.

I fucking hate his kids

While others are more elaborate, or even full-blown stories.

I am posting this solely because I know my ex stalks my page. When we were dating he was paranoid about me dating this specific person because he thought I had a thing for him and I know it will crush him that we are sleeping together. I always thought this guy was hot but didn’t really have a thing for him until my ex kept bringing him up. I’m not sure what I’m trying to achieve by posting this but I can’t help it.

The main thing I like about her is how much she likes me. I’m not even sure if I like her personality at all. She just likes me so much. I guess that’s all I’m really looking for in a girlfriend.

I had a crush on her for years. She was always dating someone, so I settled for friendship. A month ago, she broke up with this terrible guy, and I immediately asked her out. She said she had to think about it because she had me in her brain as a friend. But I told her, you don’t understand, I’m in love with you. It freaked her out. I told her if we didn’t get together she’d be missing out on the greatest love of her life. She thought about it for a few weeks and then decided to give it a try. Now that I have her I realize it was just a conquest and the fantasy was what I wanted, not the reality.

Jake and I just wanted to elope. But when our families heard about our plan, they flipped out! They said they'd pay for the wedding, and to trust that we'd thank them later. We didn't want to break their hearts, so we said "fine," and then, of course, they put us through pure hell for a whole year planning the damn thing. They argued endlessly over EVERYTHING, even where we were going to take OUR honeymoon. They stressed us out so much that we almost broke up! But then we remembered how much we loved each other and that once the wedding was over we would be married (holy shit!) and that's all we really cared about anyway. Then the big day finally came and…it was a total mess. The make-up lady was ten minutes late because she had gotten a DUI and Mommy started strangling her! Knowing Mommy, she was just intending to scare the poor lady, but then Mommy took it too far and ended up choking her to death, so I had to do my make-up all by myself! Then Daddy found out that Jake's daddy went behind his back and hired a DJ instead of the Motown cover band they’d agreed on, so Daddy took out a switchblade and cut off Jake's daddy's left ear. Then Daddy swallowed it in one gulp so Jake's daddy couldn't get it back. Ugh. Daddy! It was at that point that Jake and I screamed at our parents and reminded them that it was OUR big day, and we were done with them making it all about themselves! That immediately snapped our parents out of their nonsense. They really took our words to heart and our daddies even ended up making out on the dance floor while the DJ played the hits on her iPod mini. And as our mommies disposed of the make-up lady's corpse, they actually made plans to get together and play Bridge! Everyone danced the night away until two in the morning and afterwards me and my husband (!!!) lost our virginities to each other in a conference room at the Hilton Garden Inn that our parents booked for us with a coupon from Groupon. Turns out neither Jake nor I knew where the penis was, but that's ok, we have the rest of our lives to figure that stuff out. In the end, it was a wonderful wedding and our parents were right, eloping would have been a big mistake.

Most of the pictures come from user submissions, but occasionally the account delves into the world of celebrity couples, of both the real and fictional variety.

I take her for granted

Not really sure why anyone rooted for us

She is my muse

Our secret to longevity is inviting other couples into our bedroom

We have caused so many people to cheat on their spouses and have wrecked so many homes because of the false notion we provided to the world that the fantasy of true love can be found at work, when really humans are just horny animals who will want to fuck anyone they are close to for a long period of time and when they’re at work they’re super depressed and hoping for a better life and that’s why a co-worker who understands their specific depression seems so attractive but really every person is just some idiot and will never be your source of happiness and you should probably just stay with your spouse and make it work

Even though we disagree on politics, we still manage to make it work

I love you, Daddy

(Sorry you didn’t really just see that. Move along and pretend it never happened.)

“People are full of shit, especially online,” the account’s author (who wishes to remain anonymous for now) told the Daily Dot via email. “It’s a projection of what people want others to think their life is like, but it’s obviously false. And to some degree, harmful. Why can’t people just be honest? The dishonesty makes so many people feel inferior that their lives don’t measure up to this false sense of happiness that is impossible to achieve. Also, I’m tired of people posting how much they love their significant others and then breaking up a week later.”

As we mentioned, the majority of pictures come from user submissions, and the account’s author isn’t trying to roast anyone who isn’t asking for it. Anyone can submit a photo, but the account asks that you have the permission of everyone in the picture first.

“One time a woman sent a photo of her and her boyfriend, and we posted it,” the author told us, “and he had no idea she had sent it in, so he reported us and we got a warning from Instagram.”

“I try to be rigorous but can’t always be sure,” the account’s author explained. “There are so many submissions.”

Despite a few unintentionally hurt feelings, the account’s author feels like what they are doing is helpful overall. While the captions themselves might be fictitious, the sentiments behind them are very real. They might not apply to the couples in the pictures, but they definitely ring true for some of the people reading them. Acknowledging those feelings can be really a positive thing, and step towards correcting whatever is wrong. Besides, it’s also very funny.

“Honesty is helpful for everyone because it makes everyone else feel less fucked up that they are going through the same shit,” the author explained. “Relationships are intensely hard and pretending they aren’t is silly. But as long as people pretend, there is humor to be mined. So keep being fake. It’s fun to make fun of!”