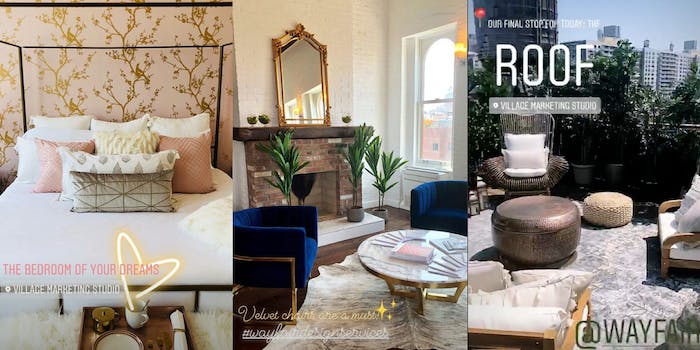 This $15K apartment is just for Instagram influencer photo shoots

We’ve already seen the rise of the pop-up museum, a space that seems designed almost entirely as a backdrop for Instagram photos that will generate thousands of likes and comments. Will pop-up apartments become the next trend?

An article published in the New York Times on Sunday detailed an immaculate Manhattan penthouse apartment that costs $15,000 a month—yes, $15,000—and features a “millennial pink” sofa, lots of plants, and “books chosen for their appearance, not their contents.” It’s popular with so-called Instagram influencers, who are using the space as an artificial setting to help push whatever they’re selling.

The apartment did not go over well on Twitter, where people criticized it as yet another depressing example of late capitalism.

— the answer to life, the universe, and everything (@sunoppositemoon) October 1, 2018

Please just let the asteroid come & give us a dignified end before we implode in a singularity of narcissism. https://t.co/Itrl1cUuBF

The Times reported that Village Marketing opened the apartment in August as an alternative for photographers seeking space for a photo shoot. The apartment looks mostly pleasing until you zoom in on the details: a painting of a hashtag in the living room, a poster that says “The Future is Female” in the bedroom, and entirely too many gold accents. And then there’s this:

There is also the “rah-rah-Instagram-slash-feminist-wall,” an area filled with photographs of Instagram influencers and messages of female empowerment.

But in case you just looked at the photos of this apartment and decided that it’s exactly what you need to create polished Instagram posts, you may have to wait. According to the Times, the apartment is already booked through October.

And if millennial pink and gold-accented everything is not your style, don’t worry. If this pop-up apartment succeeds, we’ll probably see plenty more.