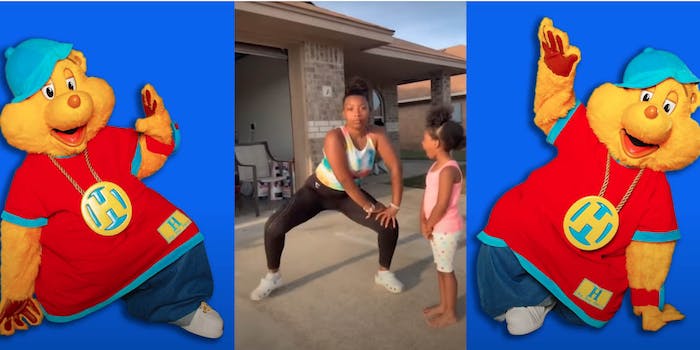 You’ve heard the song if you’ve scrolled through TikTok long enough: a bit of fluttering flute, a drum-line beat, and a chorus of kids chanting ,”Go go go.” Then, a voice calls out: “Who’s next?”

It’s from the educational kids’ show Hip Hop Harry, which ran on Discovery Kids and TLC from roughly 2006-2008. It now lives on YouTube, but in the last few months the song has dominated TikTok, where both the audio from Harry’s “dance circles” (a variation on the theme song) and actual clips from the show are circulating.

Actor Claude Brooks is the show’s executive producer and creator. He tells the Daily Dot that the idea for Hip Hop Harry came in the early aughts when he was putting together another show with Nelly, at the height of “Hot in Herre” fame. When Brooks’ young nephews caught wind of the news they started freestyling Nelly’s lyrics, and he saw a way to use “rhyming as a way to kind of teach social, emotional-related stuff.” The series often explored inclusion and conflict resolution, with the dance circles bringing the kids together at the end.

The audio has been circulating TikTok for a while. Back in January, user itskshizzle posted one about mental health, using the song as the soundtrack. The audio has been used in more than 1 million videos; there are multiple remixes and an incredible violin cover.

Inspired by cast member Jake Deanda’s widely memed dance moves, there was also a “Stanky Leg” dance trend. Deanda, who was 9 at the time, embraced his meme status and revisited the move on Instagram last month.

Brooks says he was “shocked and happy” to see families in quarantine participating in the dance trends, and that it was “really hitting all racial boundaries,” which reinforced the mission of the show.

More recently, the song has been used in videos about protests and Black Lives Matter, and the “Go go go” part was recontextualized.

“Go go go” and “Who’s next?” traveled to Twitter, where they’ve been applied to a recent streak of tearing down symbols of oppression and holding people in power, like the Los Angeles Police Commission, accountable. As Gita Jackson noted in a recent piece for Vice, protesters in the U.K. did the Stanky Leg on the site of the toppled Edward Colston statue.

Brooks points to a recent remix that changed “go” to “vote,” and says that it’s more than a challenge. It’s a movement.

It helps that the song is incredibly catchy, but seeing Hip Hop Harry rewritten in terms of current events, as police brutality (and protests against it) continues, “Who’s next?” carries a little more weight. Brooks says he was pleasantly surprised that Gen Z—the demo that might be most familiar with the show—was giving the song momentum and applying it to peaceful protest. But, he adds, the four Minneapolis police officers being arrested in the death of George Floyd added another layer to “Who’s next?”

To keep the momentum going, Brooks has been busy producing new “bite size” episodes of Hip Hop Harry, as its resurgence has translated to a surge in YouTube views and subscribers. And, of course, Harry is on TikTok now.