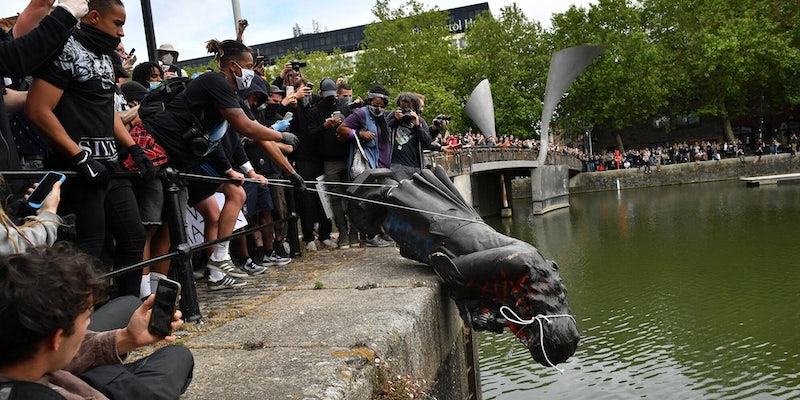 They dragged it from its podium and dropped it in the water.

As Black Lives Matter protests spread across the world, one particular image is making a major impact in the UK: a crowd of protesters toppling a statue of English slave-trader Edward Colston.

Colston came from a wealthy family of Bristol merchants, gaining massive wealth through the Royal African Company, which kidnapped and enslaved tens of thousands of people, forcibly transporting them across the Atlantic ocean. Many died en route. Colston used the resulting profits to become an influential philanthropist in Bristol, and this particular statue stood in a prominent place in the town center. During Sunday’s protests, a crowd pulled it down from its plinth and rolled it into the nearby harbor—the same place where Colston’s slave ships docked 300 years ago.

Much like the destruction of confederate monuments in the U.S., this protest proved controversial. Detractors (including various Conservative politicians and the leader of Britain’s center-left opposition, the Labour party) criticized the protesters for removing the statue by force.

However, activists had already been campaigning for years for the statue to be removed. Petitions were signed, and a member of parliament called for its removal in 2018. But “going through the right channels” didn’t work. Instead, Black Lives Matter protesters efficiently removed the statue in just one day, drawing national attention to Britain’s ugly past.

In the aftermath, Bristol’s mayor, Marvin Rees, expressed sympathy for the protesters’ actions, saying, “I’m a descendant of Jamaicans who at some point were enslaved, and I can’t say that that statue was anything other than offensive to me.” But the protesters may still face arrest for vandalism and disorderly conduct, with the Home Secretary tweeting, “These protests have been subverted by thuggery. Justice will follow.”

When monuments are forcibly removed like this, one of the main criticisms is that protesters are somehow “erasing” history. But this example really proves the opposite. Few Britons had heard of Edward Colston before this week, but now he’s one of the top news stories in the country. By removing his statue, the protesters forced many people to confront Britain’s history with the slave trade—and target other offensive monuments for removal.