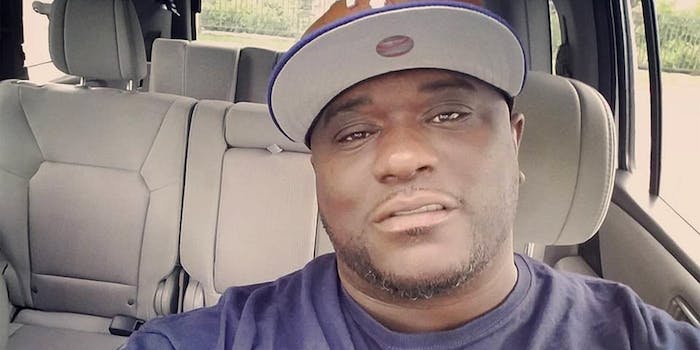 His arrest was being filmed for a cop TV show, 'Live PD.' The A&E show says it destroyed the video evidence.

A Black man was killed during an arrest after telling police officers, “I can’t breathe” in Texas. The incident went viral this week after the year-old body camera footage was obtained by KXAN.

It was later learned the fatal arrest of Javier Ambler, 40, was reportedly being filmed for a cop TV show, Live PD, according to People. That footage, according to the Austin-American Statesman, was destroyed.

Advocates say the Live PD footage was withheld by the Williamson County Sheriff’s Office (WCSO), KXAN reported on Monday. Travis County District Attorney Margaret Moore said via Twitter the DA’s office has been embroiled in a year-long fight with the Williamson County Sheriff’s Office for the Live PD footage, citing a “lack of cooperation” in an interview with NBC News.

“What should have been a routine traffic stop, ended with Javier’s death,” Moore tweeted on Monday.

The bodycam footage was recorded on an Austin Police Department officer’s bodycam.

“Video of the tragic death of Javier Ambler was captured by body cams worn on the officers involved as well by the producers of Live PD who were riding with certain officers involved,” USA Today reported.

The bodycam was obtained and publicized this week amid protests against police brutality and systematic racism. The nationwide protests were sparked by the police killing of George Floyd, who similarly told officers that he couldn’t breathe.

Ambler was reportedly tased four times after officers went on a 22-minute-long police chase because he did not dim his headlights for oncoming traffic, according to NBC.

The bodycam footage shows Ambler on the ground.

“Give me your hands or I’m going to tase you again,” one of the officers screams while sirens blare in the background.

He is also heard screaming, “I can’t breathe” in the footage.

Ambler became unresponsive when he was in custody, according to KXAN.

Jeff Edwards, Ambler’s family attorney told NBC of why it hadn’t released the footage, “[The department’s] conclusion was: there’s nothing to see here that’s reasonable.”

“The footage never aired on Live PD per A&E’s standards and practices because it involved a fatality,” the network said in the statement. It then defended destroying the video evidence.

“Contrary to many incorrect reports, neither A&E nor the producers of Live PD were asked for the footage or an interview by investigators from law enforcement or the District Attorney’s office. As is the case with all footage taken by Live PD producers, we no longer retained the unaired footage after learning that the investigation had concluded. As with all calls we follow, we are not there to be an arm of the police or law enforcement but rather to chronicle what they do and air some of that footage and our policies were in place to avoid having footage used by law enforcement against private citizens.”

Dashcam footage has also yet to be released.

The incident remains under investigation.

Update 12:12am CT, June 11: A&E canceled Live PD on Wednesday following reports that footage of Javier Ambler’s death was destroyed, according to BuzzFeed News. In a statement to Variety, the network said it’s a “critical time” in U.S. history.

“Going forward, we will determine if there is a clear pathway to tell the stories of both the community and the police officers whose role it is to serve them,” A&E said.