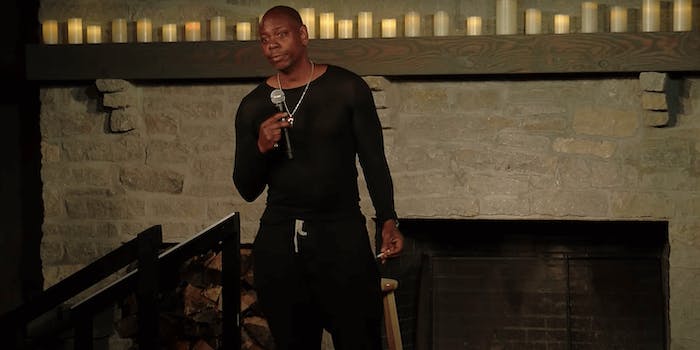 "Normally I wouldn't show you something so unrefined, I hope you understand."

The @NetflixIsAJoke account tweeted the link to the special shortly after midnight, and “Dave Chappelle” quickly became (and remains) the highest-trending Twitter topic in the United States.

Filmed in front of a small, socially distanced crowd, 8:46 marks the first in-person concert in the United States since the coronavirus pandemic hit. The 27-minute special is a solemn, contemplative affair, with Chappelle largely eschewing jokes to talk candidly about the death of George Floyd at the hands of Minneapolis police officer Derek Chauvin.

The video description includes a note that reads, “From Dave: Normally I wouldn’t show you something so unrefined, I hope you understand.”

Chappelle admits he waited a week to watch the video of Chauvin kneeling on Floyd’s neck for eight minutes and 46 seconds. When he finally watched it, he said he understood immediately what he was seeing. Floyd’s cries for his dead mother reminded Chappelle of his own father crying out for his grandmother on his deathbed.

“When I watched that tape, I understood this man knew he was going to die,” he says.

The ensuing protests that have erupted across the nation over the past two weeks ought to make sense to police officers and onlookers, Chappelle says.

“What are you signifying that you can kneel on a man’s neck for eight minutes and 46 seconds and feel like you wouldn’t get the wrath of God?” he asks. “That’s what is happening right now. It’s not for a single cop. It’s for all of it.”

Elsewhere in 8:46, Chappelle takes aim at Candace Owens (“the most articulate idiot I’ve ever seen in my f*cking life”) and CNN’s Don Lemon, who recently called out the “Hollywood elite” for “sitting in your mansions and doing nothing” amid the protests.

“Do you want to see a celebrity right now?” Chappelle asks the crowd. “Do we give a f*ck what Ja Rule thinks? Does it matter about celebrity? No. This is the streets talking for themselves. They don’t need me right now. I kept my mouth shut, and I’ll still keep my mouth shut—but don’t think my silence is complicit.”

Near the end of the special, Chappelle rattles off a laundry list of Black men killed by police and, in some cases, civilians: Eric Garner, Trayvon Martin, Philando Castile, John Crawford III (whose death got buried in the news cycle because of the shooting of Michael Brown four days later). Some critics, like Owens, have argued these men don’t deserve to be turned into “heroes” because of their pasts. Chappelle wants no part of that argument.

“We’re not desperate for heroes in the Black community,” he says. “Any [N-word] that survives this nightmare is my goddamned hero.”