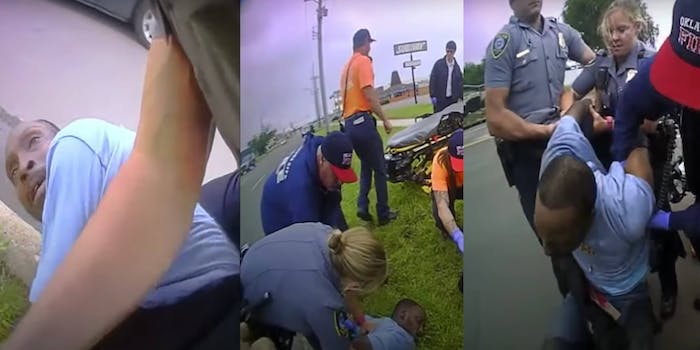 The man later died in a local hospital.

The May 2019 footage shows three officers arresting Derrick Scott, 42, after police received a complaint that he was involved in a disturbance and was brandishing a firearm, according to Capt. Larry Withrow.

The officers are seen chasing Scott in the video and eventually restraining him. While in custody, Scott laid face down in the grass and asked for his medicine, saying “I can’t breathe.”

In response to Scott, one of the officers, Jarred Tipton, said “I don’t care,” per NBC. Another officer said “you can breathe just fine” moments later.

Scott was pronounced dead at a local hospital later that day, Withrow said in the statement. An autopsy states that Scott suffered no fatal trauma and that the probable cause of his death was a collapsed lung, KFOR reports. The autopsy also listed asthma, meth, and physical restraint as contributing factors.

“This case was fully investigated by the Oklahoma City Police Department and handed over to the DA’s office,” Withrow said in the statement. “District attorney David Prater reviewed the case and there was no misconduct or any inappropriate action on the part of the officers. He cleared them of any criminal wrongdoing and they were returned to regular duty.”

The Oklahoma City Police Department did not immediately respond to The Daily Dot’s request for comment.

Scott’s mother, Vickey Scott, wrote in a May 28 Facebook post that her son received no justice and his death was “swept under the rug.”

“I will fight for justice for my sons Honor and memory,” she wrote. “It does not matter no one deserve to die this way. My son is gone like so many others but we can fight for our living ones to stop this terrible disease of hatred. White European brothers and sisters you must scream louder than me. Yes we are all in this together!!”

In response to the released footage, individuals shared the statement “I can’t breathe” on social media, a phrase that both George Floyd and Eric Garner said before dying at the hands of police.

Boonie Hidalgo created a petition, writing that “the fight for justice for the black community is not over. #JusticeForDerrickScott.”

The petition has over 2,000 signatures.

NAACP Legal Defense and Educational Fund tweeted on June 11 that “we must continue to demand the end of fatal police maneuvers.”

Many are demanding justice for Scott and that people “say his name.”