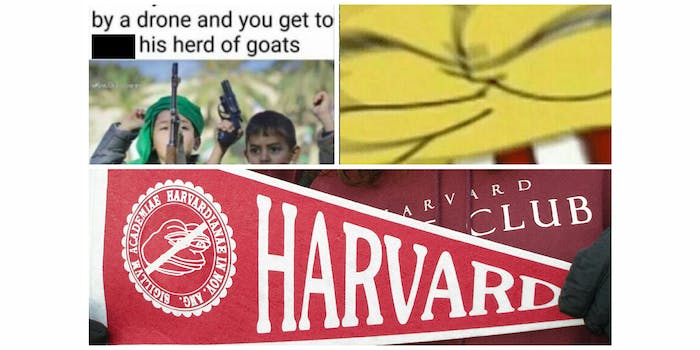 What the Harvard teens don’t get about memes

At least 10 members of Harvard University’s incoming Class of 2021 had their admissions offers revoked this week after sharing racist memes in a private Facebook group. What they’re learning the hard way—and they won’t be the last kids their age to learn it— is that meme culture doesn’t translate well to real life.

The current fad for “edgy” memes that deal in explicit racism and misogyny, as well as touchy subjects like suicide, school shootings, and mental illness, has been incubating for years in communities like 4chan. It was exacerbated in the early 2010s when what appeared to be an organized infiltration by the white supremacist site Stormfront forever transformed the character of 4chan‘s politics forum, /pol/.

The driving force behind 4chan has always been “free speech” and a lack of censorship. Because posters there are anonymous by default, users felt free to speak their minds, which has led to mobs of teens experimenting with transgressive opinions about race, gender relations, sex, and violence. Because the 4chan community was conditioned toward free speech absolutism, the Stormfront invaders could be called out, but they couldn’t be blocked or forced to leave. In time, most /pol/ posters either embraced their “white power” message or fled the board, transforming /pol/ into the white supremacist cesspit we know today.

At its best, 4chan was—forgive the ironic terminology here—a “safe space” for kids whose IRL social lives weren’t necessary going well to share their frustrations and form a community. The game of making memes came to form the center of the site’s social life, and there were rules to the game, both written and unwritten. It was a community where shitty, offensive humor thrived, but it was still a community.

“It is not necessarily that these teens and young adults find themselves truly thinking and acting the way depicted in edgy memes, but rather the topic is something that they are just now discovering and it comes up in  a crucial time of self-discovery and brain development, so they delve deeper into it,” explains Brandon Wink in Meme Insider, a journal of internet trends.

Gradually, though, 4chan posters’ “ironic” offensive jokes grew more sincere in their intent. Memes about “n*****s,” which were once posted just for the thrill of using the forbidden word and getting away with it, gave way to earnest arguments for white supremacy. The line between irony and racism, if it had ever existed at all, became painfully blurry.

Many early 4channers grew out of this kind of humor (as a lot of teens do) once they realized that sarcastic racism is still racism. But 4chan went on, increasingly poisoned by the Stormfront-radicalized /pol/, and the meme culture it created spread to Reddit, Twitter, iFunny.co, and beyond.

Now the bellwethers of the “meme economy,” like Reddit’s r/dankmemes, are defined by images that mock autism, suicide, and pedophilia. They also regularly celebrate Hitler while attacking Muslims and black people, a trend that has only gotten more mainstream thanks to the election of Donald Trump.

This toxic element has come to dominate so much of meme culture that even people in the dankest shitposting communities are beginning to reject it. Words like “edgelord” have been coined to describe teens (or adults who act like teens) who make offensive memes just because they can.

Months or years of shitposting on Reddit and 4chan can easily desensitize a person to the worst humanity has to offer, which makes a meme economy based on ever-escalating edginess unsustainable in the long term.

“If there’s one thing about edgy memes, they cause a reaction. … But after the fifth time seeing the same shitposty format, one doesn’t feel inclined to laugh at all. A meme loses its dankness when it becomes a race to find a new way to combine sex with children and suicide,” toastmeme went on. “Edgy memes will peak soon.”

But memes are largely a game played for Facebook likes, Reddit Karma, and laughs. And right now—perhaps due to a sense of anomie brought on by bleak economic prospects, crippling student debt, and geopolitical uncertainty—maximum edginess is the most effective way to win.

The game provides both a social life and a source of identity, and that tends to bleed over into real life, especially when it’s encouraged and exploited by white supremacists, the alt-right, and Trump supporters who aren’t just playing around.

All of the trappings of edgelord culture—Pepe, the deity Kek, the idea of electing Donald Trump just to troll the world, and the “meme magic” that some believe won him the election—are signifiers that unite teens steeped in internet culture. “Normies” (that is, most people) don’t get the joke, though, and that’s where the formerly Harvard-admitted students went drastically wrong. As they watched the world play out around them, the Harvard teens clearly thought things online and IRL had become the same. And that it all feels good, man.

“I appreciate humor, but there are so many topics that just should not be joked about,” incoming freshman Jessica Zhang told the Harvard Crimson. “I respect the decision of the admissions officers to rescind the offers because those actions really spoke about the students’ true characters.”

“I haven’t seen any of the stuff firsthand, but I definitely think that the administration made the right choice and I think that as an incoming student—we all have our group chats and everything like that going on—we all pretty much universally agree it was the right decision,” added Wyatt Hurt, another member of the Class of ’21.

A meme culture that leans so heavily on racism, misogyny, and taboo topics is putting a self-imposed limit on its appeal. It turns out, for example, that most Harvard freshmen aren’t that into jokes about using dead Mexican kids as piñatas.

For some memers, though, that’s the entire point. Memes are their thing, and making them offensive keeps them from catching on with the “normie” mainstream. This may have been the attitude of the Harvard memers, who asked prospective members of their group chat to submit a suitably distasteful meme. Perhaps they assumed that others would parse the wry, ironic intentions of their jokes and realize that they were playing a game, not being “real racists.”

As BuzzFeed’s meme expert Katie Notopoulos wrote on Twitter, “I am guessing that [the Harvard memers] would not consider themselves racists at all. But a good rule of thumb is that people who are ~actually~ *not racist* don’t post racist memes.”

But now so much of the meme world is based around that behavior. And in a world where Trump won, many edgy memers faced the first real public repudiation of their ideology this week. Whether the Harvard incident reverberates through larger meme culture and pushes it back toward tamer ground is yet to be seen. It’s likely the dankest memelords won’t be fazed by it. But at the same time, it’s clear that being edgy for the lulz is starting to get less funny.